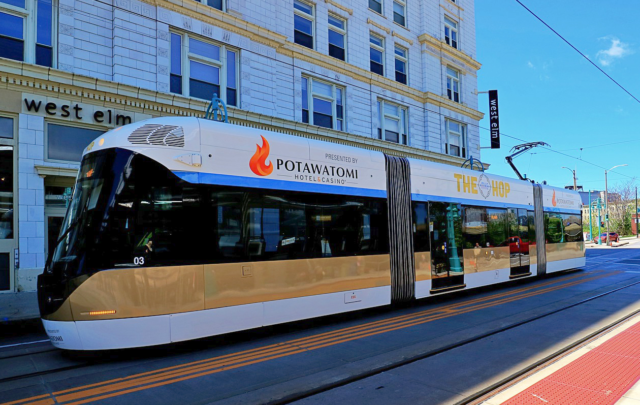 Milwaukee’s streetcar The Hop will remain free to ride for the time being. Under a new sponsorship that begins tomorrow, the business-only fiber network Everstream will provide free fares to Hop riders through the end of the year, while also partnering with The Hop on a “festive, holiday-themed streetcar” that will debut later this month in conjunction with Milwaukee’s annual tree-lighting ceremony.

Mayor Tom Barrett announced the sponsorship at an event today celebrating The Hop’s first year of operation. Barrett announced that there were 802,541 rides in The Hop’s first year, exceeding the city’s goal of 600,000. “Surely, part of that success is due to free fares,” he said. “Free fares make the streetcar more inclusive to the entire community.”

There’d been some question about how long the streetcar would remain free. Mayor Tom Barrett has indicated he would like to keep The Hop free for as long as possible, even after an initial one-year sponsorship with Potawatomi Hotel & Casino to cover fares came to an end.

In a sign of Barrett’s belief that The Hop will remain free, the city never installed equipment that would allow the streetcar to collect fares. Under a scenario where streetcar were no longer free, passengers would buy passes before boarding. Fare inspectors would occasionally check for those passes, but no money would be collected on the streetcar.

In a statement today, Barrett celebrated The Hop’s partnership with Everstream. “I’m thrilled to welcome Everstream to the Milwaukee community and The Hop family,” Milwaukee Mayor Tom Barrett said. “We’re proud to partner with a company that shares our vision for a more connected and forward-thinking city, and we’re thrilled that our streetcar riders will benefit from their investment in Milwaukee. The holiday season is packed with wonderful downtown events, and thanks to Everstream, The Hop will continue to be a fun and free way to access all that our city has to offer.”