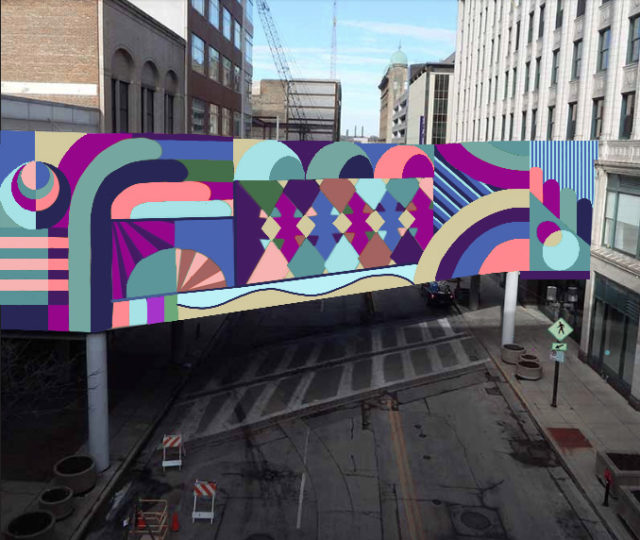 When you look around a city, does it represent the people living there? Does Milwaukee’s public art reflect the unique experiences we face? I spoke with Gabriel Yeager, Downtown environment specialist with Milwaukee Downtown, about two upcoming murals in Milwaukee.

Earlier this year, prior to COVID-19, the south-facing facade of the 2nd Street skywalk between Wisconsin Avenue and Michigan Street was announced as a new community canvas.

Milwaukee Downtown took the opportunity to invite Wisconsin artists to unite people through public art. They received more than 60 submissions, which they essentially boiled down to two artists to install their art and share their stories.

Wisconsin native Jaime Brown was the first to be selected for the 2nd Street skywalk mural titled “Kindred,” a quilt-like mural piece.

The second artist, Ken Brown, is dedicating his canvas to amplify and pay tribute to the frontline and essential workers in response to COVID-19. It will be located at MacArthur Square.

After the recent national protests in response to police brutality, Brown has been capturing images of solidarity between protesters and the police department to include in his mural titled “The Hero in You.”

“MacArthur Square has been known as Milwaukee’s lost civic square but in the last week it’s certainly been found,” said Yeager. “It’s really the epicenter of recent protests but moments of unity.”

Beyond just the two murals, Milwaukee Downtown created an interactive map that documents more than 140 sculptures, monuments and murals for individuals to socially distance walk and discover artwork along the way.

One can filter through the map by collection or by category to customize their own walk path throughout Downtown Milwaukee.

“I think the importance of public art is seen not only in Milwaukee but really across the world right now in a way that helps escape some of the challenges we are facing right now and helps us connect emotionally a larger community,”