This 1980s mural is super meta — and getting a facelift!

This 1980s mural is super meta — and getting a facelift! 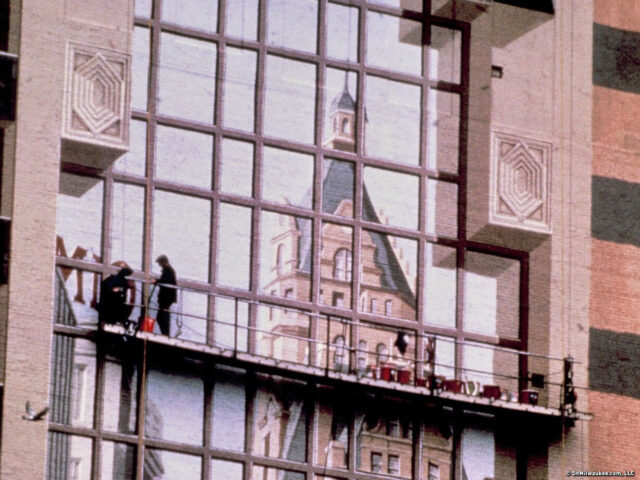 The mural was installed in 1981, on the side of the former Grand/Warner Theater at 2nd and Wisconsin Avenue. Created by New York artist Richard Haas, the mural spans nearly the entire height of the office tower.

It is painted to look like a series of glimmering windows, showing a reflection of other buildings. In fact, it’s so realistic, you might not even notice it passing by today. And, interestingly, some of those buildings were no longer standing when the mural was created, so it had this built-in historical nostalgia nearly 40 years ago.

Over the years, the coloration has deteriorated, losing some of those fine details. But good news for the gigantic piece of public art: It will be restored, as part of the ongoing construction project on the same site.

The 1930 Grand/Warner Theater is currently being redeveloped as the future home of Milwaukee Symphony Orchestra (we’ve “spelunked” it in the past), and will include a new construction annex. In addition to restoring the mural, the new building will include a skylight, opening up a view of the restored mural to visitors passing through.

Listen to this week’s Urban Spelunking podcast below, and be sure to read Bobby Tanzilo’s complete story at OnMilwaukee.com for more history and photos.