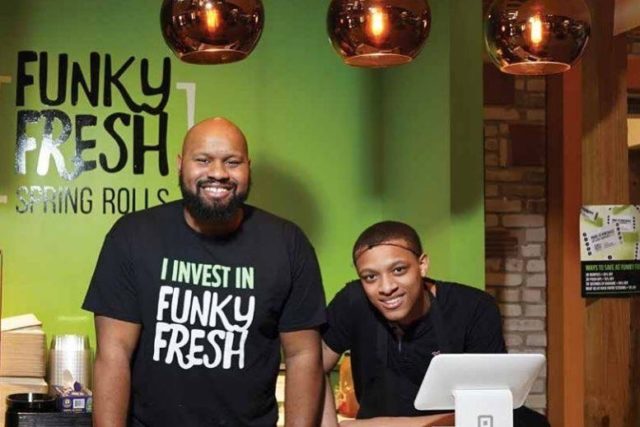 What would it take for your kid to get excited about doing math homework? If healthy spring rolls would sweeten the deal, one Milwaukee business owner might be able to help.

Funky Fresh Spring Rolls has been churning out its signature healthy rolls for six years now. McGee has steadily grown his business, first from his kitchen table, then to the Grand Avenue mall and recently relocating to the Sherman Phoenix.

He could have just rode that wave — stayed in his lane as business owner –and no one would have blamed him. But that wouldn’t be him; he wanted to do more.

“I feel like we as leaders of the community, as entrepreneurs and business people, we almost have a obligation to give back to the community,” McGee says.

To get his math night going, McGee knew just where to start. He turned to his high school algebra teacher, Mary Mooney, who he kept in touch with over the years.

“She said ‘would you be interested in doing a math day or something?’ And I’m like, ‘absolutely,'” McGee says. “If you can organize the math night, I’ll bring the food.”

“And that was pretty much the conversation, and that’s how it started. Which is kind of funny, but it literally was like a five minute conversation,” says Mooney.

McGee says, first, he hopes to inspire other business owners into action, to do something positive for their own communities. But above all, he wants the kids to walk away feeling supported.

“I want the kids to see that there are people that care about them outside of school, outside of their homes, who want them to succeed in life. If the kids in the community are winning, then we are all winning,” McGee says.

Math night is every Thursday at the Sherman Phoenix from 6:30 to 7:30 p.m. The program is free.