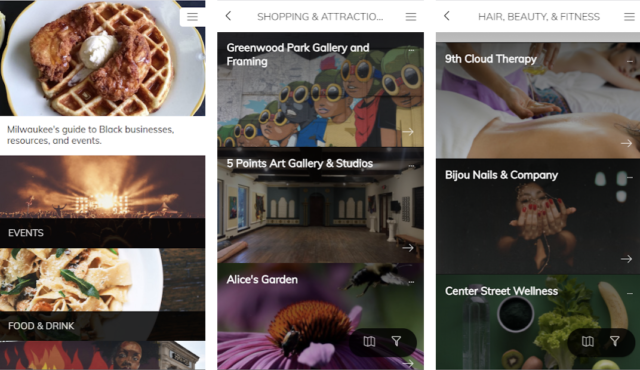 The local non-profit MKE Black recently launched an app that highlights black-owned businesses in Milwaukee. Released on Feb. 10 with a launch party, the app now has more than 300 businesses in its database.

Users can locate businesses, restaurants and attractions by map or list views. The free app has additional features that include a history on Milwaukee neighborhoods, job postings and upcoming events.

According to the 2017 National Urban League report, Milwaukee was ranked one of the largest cities with a high inequality wealth gap. The app created by Rick Banks and Paul Wellington in hopes to reduce the staggering disparity.

“I’ve always been a person who’s seen problems and wanted to come up with solutions to those problems,” said Rick Banks, co-founder of MKE Black.

Another way MKE Black plans to bring attention to businesses is by including upcoming tours around Bronzeville and other cultural sites. Banks says the main goal is to help black-owned businesses thrive.

“We really want economic equity and economic justice not just for black people but for everybody,” said Banks. “We have to start spending our dollars in an equitable way and unfortunately not that much support goes into black-owned businesses and other minority businesses.”

The idea started after a late-night text exchange this past summer. They reached out to a professional developer with a price quote of around $20,000.

Naturally, that price point created a temporary roadblock and they looked into other avenues. In mid-November, Wellington found a platform called BuildFire, that allows anyone to build an app from scratch.

MKE Black is available for Android operating systems, and will soon be available in the Apple App Store.