This public art was a little contentious in 1932

This public art was a little contentious in 1932 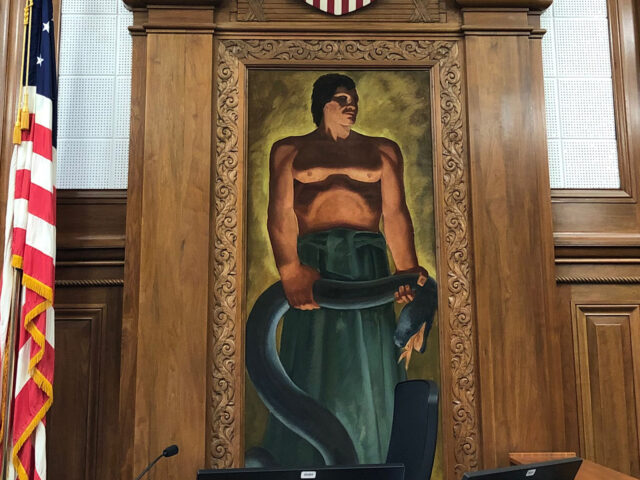 Art is subjective. It is meant to be open to interpretation, to discussion.

But there’s something about public art in particular that can spark an especially lively debate, from enthusiastic acceptance to searing disdain. And it’s nothing new; Milwaukeeans have been debating the merits of art in public places since at least the 1930s as evidenced by a series of paintings inside the Milwaukee County Courthouse.

“For this, it tapped a Wisconsin artist to create 25 canvases, 24 of which would be installed behind the benches of courtrooms and one larger one that would adorn the County Boardroom,” writes OnMilwaukee’s Bobby Tanzilo.

But a 1932 newspaper story, uncovered by Tanzilo, shows reaction was mixed, particularly to one panel depicting a large snake.

“‘Isn’t that a hell of a thing to put in a courtroom,’ queried bailiff John McManus. ‘I’m not a student of art but I’ve got to look at that picture every day and if you asked me I’d say it’s l—-y. In fact, I think it’s the lousiest picture of the whole lot. What kind of snake is that anyway?'” he said in a newspaper interview.

This week on Urban Spelunking, we share the story of the collections of murals that were commissioned in 1932 to be painted behind each judge’s bench within the courthouse. Some loved them, some harshly criticized them, and if you’ve never been in the courtroom, you’ll likely have a reaction of your own.

Listen to this week’s episode below, and visit OnMilwaukee for more history and photos.