‘Together, we can put an end to discrimination’ says Sheboygan valedictorian honored at PrideFest

‘Together, we can put an end to discrimination’ says Sheboygan valedictorian honored at PrideFest 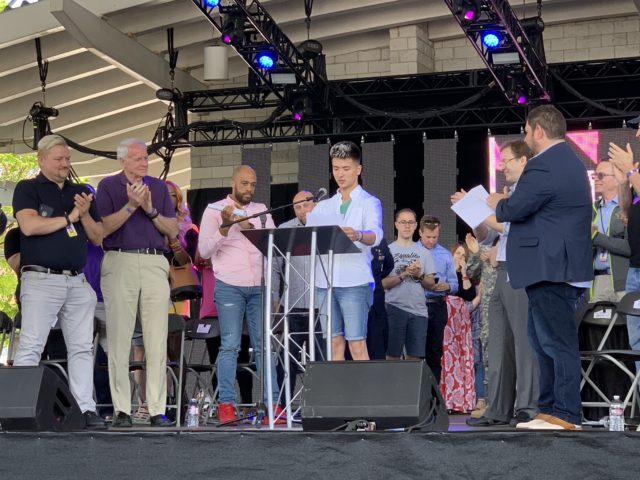 Two weeks prior, he was not allowed to give a speech at his high school graduation for its LGBT-related content. School administrators took issue with him sharing his own coming out story, the difficulties he faced as a gay student at a Lutheran school and his interpretation of certain bible passages.

But he was greeted with a standing ovation Friday at PrideFest when he was presented with this year’s Valor award.

“I would like to stress that I am in no way trying to get revenge on my high school. I want to use my voice to create change and to speak up for those who can’t do it for themselves,” he said in his acceptance speech.

Werth called for a national ban on conversion therapy, which remains legal in parts Wisconsin.

“No child should have to fear being disowned by their caretakers…no child should be taught at school they need to hate themselves to be loved,” he said.

Immediately before taking the podium, Milwaukee County Executive Chris Abele announced he would personally pay for Werth to attend the World Pride Festival in New York City and to march in the pride parade.

Now Werth says he is looking forward to spreading his message of acceptance to a national audience.

“My advice to anyone trapped by their circumstance, know that there’s nothing wrong with you. Know that speaking up can cause change to take place.”

Listen to his complete speech below.