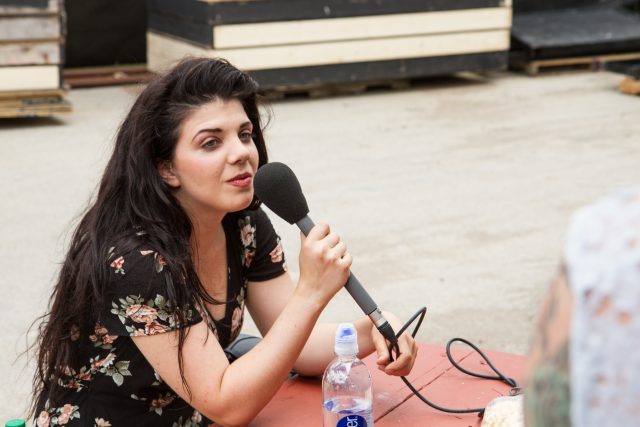 Blackie and Squeeze from Midnight Mob

“[Our sound] is pretty straight-forward rock’n’roll; if you put some concrete and Fruit Roll-Ups in it, it would probably be the Midnight Mob sound.”

Lauren, better known by her fans as Blackie Deathproof, opened for Skillet last week with her band Midnight Mob… and they killed it.

But before the band took the stage and grabbed their electric guitars, they swung by an RV at the north end of Summerfest to record something a little different: a children’s song.

“Hamburgers, hot dogs, popsicles, swimming pools… Summer’s so much fun!” Blackie sings into the microphone as her band plays alongside the engineers.

But, what’s a hard rock band like Midnight Mob doing singing a children’s song? Their singing for a little girl named Violet, a seven year old at Children’s Hospital. Violet wrote a story called “Summer is the Best”…

…and with the help of the organization Sing Me a Story, Blackie and her band are now singing Violet’s story.

“Sing Me a Story gives kids in children’s homes and hospitals and hospice organizations around the world the chance to write and illustrate stories about whatever they want. We then distribute those to songwriters who turn them into songs and send them back to the kids,” says Austin Atteberry, Founder of Sing Me a Story.

With the help of these musicians, Sing Me a Story has not only brought a smile to many kid’s faces, but has also helped them: with the songs for sale online, Sing Me a Story donates the proceeds to benefit Children’s Hospital of Wisconsin and the other various hospitals involved.

Blackie chats after her recording session

And for Blackie and her bandmates, this gave them an awesome chance to get involved and make a difference through their music and a bit of playfulness,

“This was a really great opportunity for us to be ourselves! We really really want to make a difference, so we’re doing that by singing about what we love about summer.”

Want to hear the final song “Violet’s Summer” by Midnight Mob? You can check it out and donate here.

Want to learn more about the work being done by Sing Me a Story? Check out the full story by clicking the audio player above and learn more at singmeastory.org.