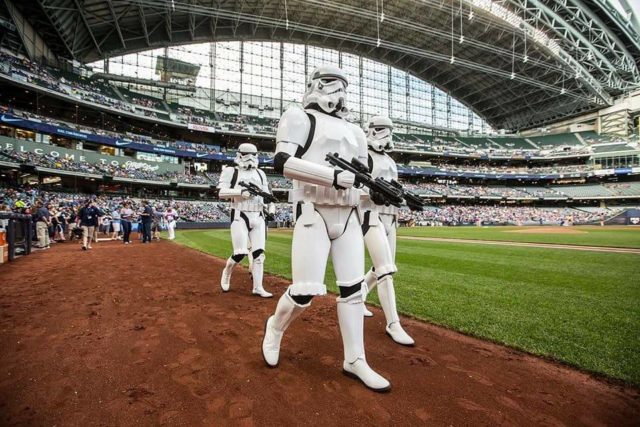 Typically, the Star Wars costuming group known as the 501st Legion would be celebrating Star Wars Day by taking part in the charity work they are known for. This would include roaming Miller Park with the Milwaukee Brewers for the annual Star Wars theme night or reading Star Wars books to children across local libraries.

But like nearly everything else, those plans are currently on hold and as we all have, the members who dress as Stormtroopers, dark lords of the Sith and Tusken Raiders among other icons have had to adapt.

Started in 2010, the Wisconsin Garrison of the international Star Wars costuming organization currently has more than 100 volunteer members across the state. Their primary goal is to promote interest in the Star Wars series through the building and wearing of approved, referenced costumes but their aforementioned charity work is where they really shine and bring iconic characters and designs to life for those who need it the most. The members are frequent visitors at children’s hospitals and Make-A-Wish Foundation events where they inspire and light up the faces of countless kids.

So how are these volunteers keeping the series’ integral sense of hope alive while staying at home? One way is by encouraging fans to donate to the 501st Legion’s Make-A-Wish endowment fund which helps to grant Star Wars related wishes involving Legion appearances.

A more immediate and timely impact is being made by members of the Wisconsin Garrison who are using their sewing and crafting skills which helped them create a costume to sew and 3D print face masks to donate to local hospitals.

To connect more directly, the garrison is also branching out into new territory with virtual trooping opportunities being coordinated on the group’s online forum. So far, these opportunities have included video greetings, birthday wishes, readings of Star Wars children books known as “501st Storytime” and most recently a birthday parade for a lucky child in Manitowoc.

501st Legion member, Wisconsin Garrison event coordinator and PR officer Becky Stankowski explains that typically the Legion sticks to community and charity events but given the special circumstances, have been happy to take part in more private and birthday events in order to connect fans with their brand of magic.

When asked why Star Wars is so helpful during a difficult time such as this, Stankowski shared that “Everyone knows Star Wars and so many people love Star Wars. Even if you’re not a huge Star Wars fan…it just takes you out of your everyday situation and puts you in a place where anything can happen.”

Costuming as a Tusken Raider and a Tie Fighter pilot herself, she adds “To see someone dressed as Darth Vader or a Stormtrooper when you’re maybe not expecting to see that, really just turns you into a kid again…(It is) a life changing experience for us to be able to wear these costumes and make a difference in someone’s life for a couple minutes.”

Wisconsin Star Wars fans and aspiring costumers can learn how they are able to become involved with the group through their site and can contribute to the Make-A-Wish endowment fund at any time.

May the fourth be with you!