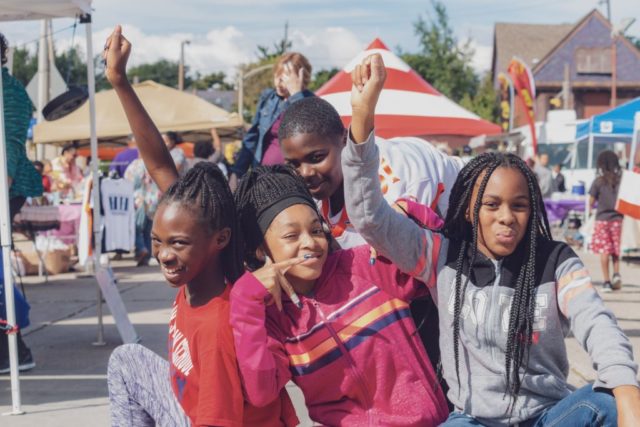 When asked to describe Harvest Day, an open-air market and street festival hosted by Walnut Way, Antonio Butts, executive director of Walnut Way said it was similar to a homecoming for the city. That’s what Harvest Day is for most people, a time to celebrate the neighborhood of Lindsay Heights and to connect with its residents.

According to the Zilber Family Foundation, The Lindsay Heights neighborhood is a historic neighborhood that was first settled by German immigrants in the 1800s. By the time it was near the 1920s, an influx of African Americans migrated to the area from the south. However, it wasn’t always called Lindsay Heights. In 1997, the area had a name change after community activist Bernice Lindsay, who was sometimes called “the mother of the black community.”

Walnut Way strives to keep the vibrancy alive by uplifting residents, transforming vacant lots into gardens and restoring residential homes. Each year they celebrate the neighborhood through Harvest Day, highlighting Lindsay Heights in the lens of a theme. Butts says this year’s theme is ‘the art of community.”

“We have a focus on art this year,” said Butts. “We’re working with a number of local artists, including Reginald Baylor, but then also the art of community from the perspective of how we’re are strengthening our network here.”

The heart of Walnut Way is the people who live there. Everything in Lindsay Heights starts with the community and the voice of the residents.

“One of the overarching goals is to create a more cohesive community and in doing that it’s very important for residents to know each other,” said Butts. “Knowing your neighbor is very important. ‘How can to ask for a favor if you don’t know your neighbor?’”

A fundamental aspect to consider is the concept of working together. The great work being done in Lindsey Heights, such as the neighborhood becoming an ecotourism destination, is done by the collaboration of residents, youth and even business partners. Butts says the success is integrated with everyone involved.

“It’s just very important that we all know and recognize that we are all interconnected and there are solutions to our deepest challenges,” said Butts. “Taking the time to get to know each other is a very important part of that process of basically solving some of those issues and challenges that we have.”

It’s quite fitting that the Harvest Day is happening on Sept. 14, at Fondy Park. The fall season can carry symbolism for change and embracing the present. Harvest Day is a day to give thanks to the growing season and the work that’s being done. All while preparing for what’s to come.