What the first memes of the decade can tell us

What the first memes of the decade can tell us 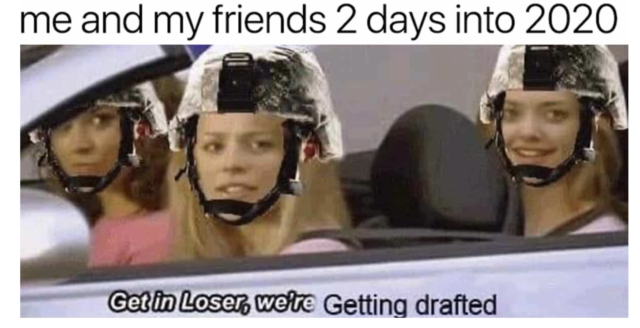 In the first week of January, President Trump authorized the assassination of Iranian general Qasem Soleimani. As many of us began to settle into the new year, not only did we witness an action that escalated tensions between Iran and the United States, but we also reacted.

Throughout this year, we’ve already reacted to some major news stories such as the presidential impeachment, coronavirus and a potential WWIII. And found that reaction was in the form of memes, an image, video or text that’s spread rapidly by internet users. Instantly after the drone strike that killed Soleimani, WWIII memes rapidly trended across social media platforms.

The memes circulated varied from platform to platform, but if you take a look at the ones that surfaced in popularity, many were from members of Generation Z living in the United States who uploaded memes as a mechanism coping with the idea of a potential WWIII. Some of these memes reflected anxiety over a potential draft, although it’s important to note that there hasn’t been news of any serious consideration of a draft.

At first glance, this response could be considered trivial. Memes have come a long way since Sad Keanu Reeves, Bed Intruder and Bone App The Teeth. They are part of our language and expression. Memes are used as a tool for political discourse and create a global connection. For the most part, meme culture is positive, but we may have missed the mark with this one.

Why is this important?

While our social media feeds were filled with animated images about a potential war, many users tweeted to denounce the memes, calling them out for their insensitivity.

When you contrast the reaction of those concerned about displacement or losing family members with the immediate response of creating absent-minded memes, it becomes difficult to tune out. Especially when majority of the content creators are not bearing immediate consequences of any casualties in the Middle East.

Although it may not have been intended, the lack of awareness and sensitivity meant that brown lives, especially ones center in bloodshed, were overlooked. Seeing these memes in a casual way on my timeline resurfaced some of my repressed memories. Growing up in Palestine, I saw homes that were demolished and turned into dust, children growing up with the expectation that death is near.

Our brown feelings, trauma and reality aren’t at the forefront of the conversation. Time and time again, we are reminded that in order to achieve empathy and compassion, we have to first justify our humanity.

What does this tell us?

It’s striking to note that these are the first memes of the decade. Perhaps in the golden decade of content, we have lost the ability to distinguish news and entertainment.

It’s important to take a step back. We are constantly receiving information and many of us, myself included, quickly jump to be part of the conversation. Perhaps sometimes it’s best to log off, take time to digest the information and have empathy.