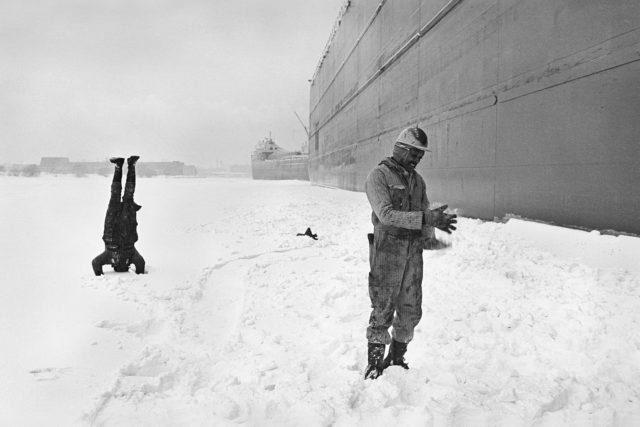 For 10 years, Jim Brozek strapped his camera to his side while he worked as a laborer on Jones Island. In between cleaning and painting steel ore boats, Brozek would snap numerous photographs capturing the haunting yet peaceful atmosphere when working during winter layups. The images were taken from 1979 to 1985 and are now currently displayed at a storefront immediately west of Mo’s Irish Pub in downtown Milwaukee.

The mesmerizing images, accompanied by sounds that were taken from the interior of the boat are projected on the storefront to celebrate the first anniversary of the 730 Projection project.

“To be out there in the middle of winter painting ore boats while you’re freezing,” said Brozek. “And all this from a frozen river, it was kind of a winter wonderland outside.”

The 730 Projection project was created by Dick Blau. Bau photographed his neighborhood from his home at 730 Plankinton Ave., over a nine-year period.

“I had a balcony that overlooked this wonderful corner with two bus stops, a bar and a constant human flow,” said Blau.

The project started when he first taped two large photographs in the lobby of his building. Once that caught on, he created a film of roughly three hundred images and decided to display the film on the monitors at Mo’s steakhouse. That decision led to an interesting idea.

“I realized that Mo’s owned a storefront just West on Wisconsin Ave, that hadn’t been rented,” said Blau. “I talked to them on setting a rear projection on one of the windows of the storefront.”

Currently, the 730 Projection is exhibiting “Winter Layup,” a film of photographs taken from Brozek when he was a laborer. The film will run from dusk till dawn until Sept. 2.

Beyond just photographing the essence of the ore boat and the workers, Brozek says he photographed to capture his own physical experience.

“I was photographing from the point of view of how maybe my body felt,” said Brozek. “Maybe my back hurt, maybe looking at the back of a worker and seeing him hunched over or something, that made me want to take some pictures of it.”

A way to enjoy the unique display of public art, Blau installed a two-seated bench for pedestrians to sit, relax and take in the images. Blau said he recalls a moment that put everything in perspective as of why he displays his work for free.

“Somebody a few months ago talked to me as I was walking by and said, ‘Did you do that?’ and I said yeah,” said Blau. “He said, ‘I was coming from my office and I had the weight of the world on my shoulders, and all of a sudden I saw your window and I just sat down on the bench and watched the whole thing. When I got up I felt lighter than air,’ but that’s the sort of thing I want to happen.”

Winter layup will be shown through Sept., 2 from dusk until dawn on a storefront immediately west of Mo’s Irish Pub, 42 W. Wisconsin Ave.