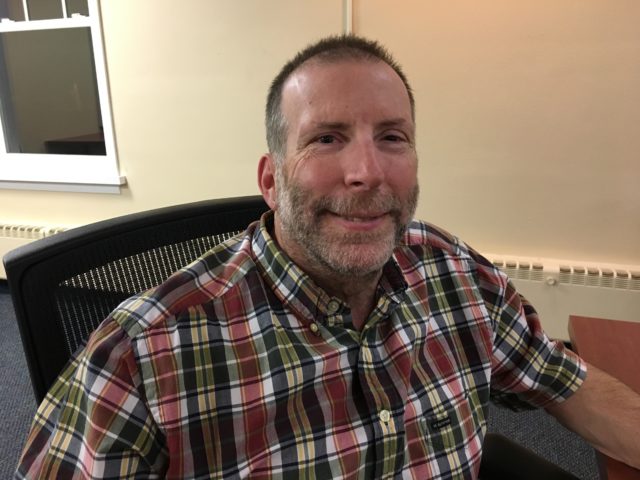 When he was in his teens, he enjoyed riding his dirt bike in the local quarry, peeling around tight corners and taking on daring jumps.  He has raced in a stock car — on a professional course — just for the thrill of it.  And during the winter months, you’ll find him at a local ski hill, cutting through the snow.

Now in his 60s, Dan has managed to keep that active momentum going in his life, despite a major challenge — complete vision loss.

Dan was diagnosed with a rare, degenerative eye disease in his mid-twenties called retinitis pigmentosa, or tunnel vision.  He first realized the disease when he was reading the newspaper on a Sunday morning.  The headline looked strange, like something he had never seen.  He thought it was a printing mistake.  But when he turned his head to one side, the text transformed, and he could read it correctly.

That was the first time he noticed blind spots.

Every year following he progressively lost more of his sight, and these days, Dan says he can only see faint blobs of light.  No faces.  No text.

For many years, he says, it was an up-and-down experience.  Some months, he would adapt and cope just fine, but other times, especially as the disease worsened more quickly, he battled depression.

He says it was the invaluable support of his wife and daughters that got him through those tough times.  And now, he’s working to extend that support to others.

The initiative is called Mainstreaming on Main Street, held monthly at Vision Forward on the border of Milwaukee and Wauwatosa.  Conversations center around a different topic each month — micro-aggressions, marginalization, personal development, etc. — and they invite the public to participate.

Dan’s sessions are free and offer a nonjudgmental environment to share first-person stories about disability. The next roundtable takes place Nov. 14.

For Dan’s own first-person story, click the player above to hear a unique no-narrator piece.