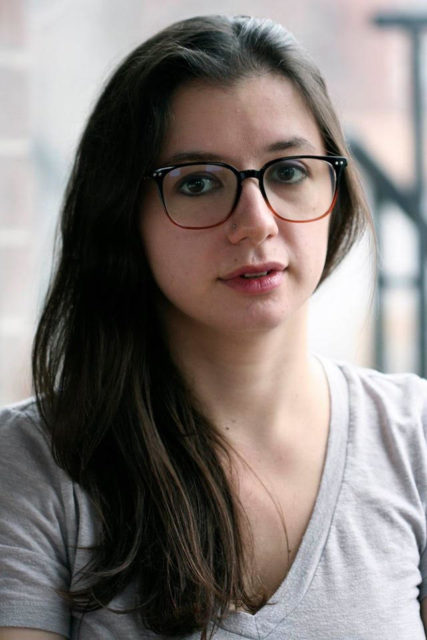 When’s the last time you read a fiction book set in Riverwest? Zhanna Slor, author of the book “At the End of the World, Turn Left,” is a former Riverwestian who now lives in Bay View. She’s written a mystery-drama about two sisters, one of whom goes missing. Masha, the older of the two, searches for her where she was last seen, in her former neighborhood of Riverwest. The book reflects Zhanna’s experiences growing up as a Jewish-Russian immigrant in Milwaukee.

“The mystery stuff, that did not happen to me,” says Zhanna. “But what I wanted to keep in the book that was important to me to talk about was the Riverwest experience, especially in 2007, 2008. Just the vibe, the music, the people. I kept some people that I knew. Some Riverwest characters that might feel familiar to readers if they were around back then.”

Zhanna studied English at the University of Wisconsin-Milwaukee and later got her master’s in writing and publishing from DePaul University. This is her first book.

“I wanted to write about the themes in this book for a long time,” says Zhanna. “I was like, ‘I need to write about Riverwest. It’s such a strange place. There needs to be a book set here. Why is there nothing set here? Every book is set in New York. I’m so sick of reading about New York.’”

But central to the theme of the book is finding home, as Masha returns to Riverwest after living in Israel for a few years. In the process, Masha starts to relive some of her own experiences as a Jewish-Russian immigrant. Through the characters, Zhanna captures what it’s like being a young immigrant trying to fit in with a foreign culture while feeling like you’re losing touch with your own.

Zhanna says that she wanted to portray that there are a good number of immigrants living in Wisconsin who left the former Soviet Union. Like Zhanna’s family’s experience, the character Masha immigrated to Milwaukee in 1991 when many Jews were leaving Ukraine.

“It’s a unique chunk of the population, because a lot of people left in ’91,” says Zhanna. “So there’s a lot of people who will be able to relate to this kind of homeless restlessness, a feeling if you leave your home as a child and you can’t ever go back because it’s not the same country anymore, because it’s not the Soviet Union; whatever you go back to is no longer your home.”

The book took many drafts for Zhanna to create, even a change in genre. Originally Zhanna started writing it as a collection of essays. Then it became a fictionalized memoir. But over the years and while seeking publishers, Zhanna’s book became a mystery seeped in the themes of immigration, finding a home and belonging.

You can pre-order the book at these places:
Lion’s Tooth
Polis Books
Amazon