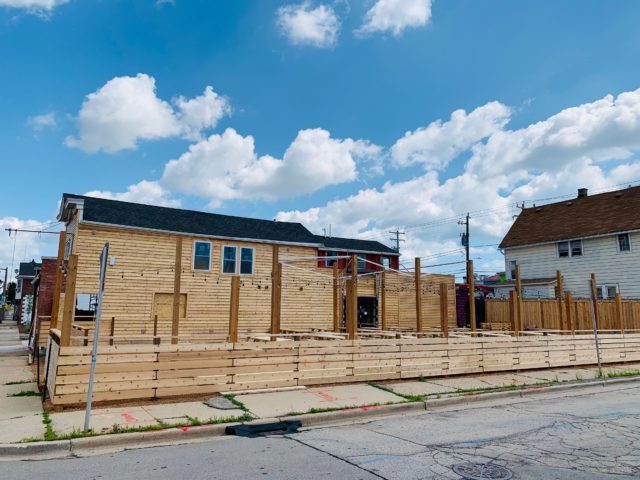 As Milwaukee continues to cement its status as a foodie’s paradise with multiple food halls, near-endless festivals boasting their own dedicated delicacies and unique restaurants appearing seemingly every week with new spins on old favorites, it can be easy to overlook the growing food truck scene.

One of the better known trucks in this rapidly expanding collective is Mazorca Tacos in Walker’s Point. Opening in the summer of 2017 in a vacant gravel lot at the corner of Pittsburgh Avenue and First Street, the truck quickly became a favorite of those who frequent the busy area with its delicious offerings of tacos crafted with homemade tortillas. However, owner Jesus Gonzalez will soon be moving the now iconic aluminum camper as a part of a new venture with Sean Phelan of Phelan Development. Starting July 13, Mazorca will join five other trucks as a part of the Gonzalez’ and Phelan’s Zócalo Food Truck Park.

Zócalo will be Milwaukee’s first foray into the growing national trend of food truck parks and will feature four permanent resident trucks, one seasonal, rotating truck and one “incubator concept” truck for six total restaurants.

In addition to Mazorca, the 2019 lineup will consist of the established Scratch Ice Cream company, which specializes in small batch ice cream, and the debuts of Fontelle’s Eatery, Bowl Cut and Ruby’s Bagels, along with a yet to be announced seasonal offering.

Fontelle’s and Bowl Cut are the remaining permanent residents and will provide sandwiches with an international flair and Asian rice bowls with snacks respectively. Ruby’s Bagels is the inaugural “incubator concept,” offering handmade bagels in a variety of flavors, and will receive a trailer and mentorship in order to grow as a business.

Given that the word “Zócalo” comes from the term for a public square in Mexico, the owners of the trucks hope that the park comes to serve a similar purpose for Milwaukee and become a community for entrepreneurs and patrons alike.

This sentiment is echoed through Zócalo’s slogan: “You Belong,” which has become their driving message on social media through a series of videos on its official Instagram page.

In addition to the six trucks, there will be a full-service bar, regular live entertainment and more than 30 parking stalls for guests.