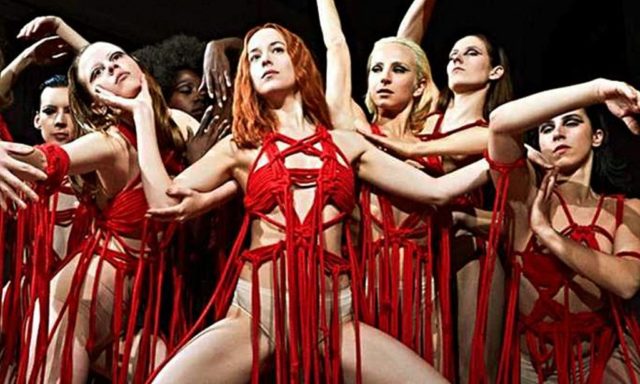 We don’t usually like remakes at.all. So we went in with low expectations and came out with not only a love for Luca Guadagnino’s 2018 “Suspiria,” but a greater love for Dario Argento’s original 1977 horror masterpiece. And we didn’t think that was possible.

Like the original movie, this one is about a young American woman who arrives in 1970s Berlin to audition for the world-renowned Helena Markos Dance Co. which holds sinister secrets, witches and gory surprises.

The original “Suspiria,” while being an iconic art house horror movie with an amazing dark aesthetic and groundbreaking horror visuals, lacks in a few areas—mainly, the pretty basic English script and a pretty hard to follow plot. That said, we wouldn’t really change a thing about the original.

The reason the 2018 version of this worked for us is that they weren’t really trying to “remake” the 1977 movie. It felt like they paid plenty of tasteful homage, took the bones of the plot, but completely developed a new movie.

The script and the plot seemed more fleshed out, though it still isn’t trying to reexplain the original. Rather, it asks to exist on its own while knowing where it came from.

The visuals and the story are all derived from “Suspiria,” but it is a completely different movie at the same time. That’s why we liked it.

Plus, it really turned it up several notches in every direction—especially on the horror.

The original was good at shocking you with a flash of horrible images, but the new movie is unrelenting with its imaginative body horror.

For some slightly more spolier-y takes and to hear us talk about our other favorite art house horror movies, listen to the full conversation above in the podcast episode.

“Suspiria” is now playing in theaters.

Both are brilliant while they have everything and nothing in common

We’re 88Nine’s Justin Barney and Milwaukee Film’s Kpolly. We’re buds, we like cinema—we’re Cinebuds. This week on the podcast, we’re talking about the new “Suspiria,” which is getting mixed reviews.

Read more and listen to the podcast below to hear about us talk about “Suspiria” in 1977 and in 2018 and some of our other favorite art house horror films.