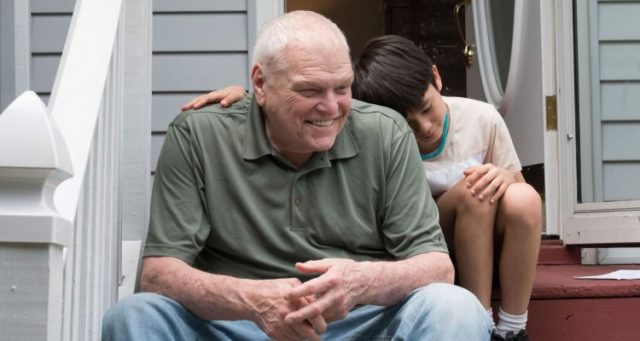 Kpolly here. This week we’re talking about the late, great Brian Dennehy and one of his last film performances in “Driveways.”

Dennehy is one of those actors that people either know or have heard of, but often can’t quite place. He’s appeared in over 180 films and TV shows, won a Golden Globe for “Death of a Salesman,” and has been cast in everything from bit parts to leading man. But, when I say he was Tommy Boy’s dad or the sheriff from Rambo, most people will light up. “Oh, yeaaaah!”

“Driveways” was the last film of his released before he passed away just last month. “Driveways” ame to the Milwaukee Film Festival last year and director Andrew Ahn spoke about working with the larger-than-life veteran actor.  We’ll discuss Andrew’s experience in the podcast and the incredibly sweet and subtle film he made. The film tells the story of a mother and son who move into her sister’s house after her passing. The young boy (played expertly by Lucas Jaye) and the elderly man next door (Dennehy) strike up an expected friendship.

“Driveways” can be seen on Milwaukee Film’s Sofa Cinema platform as of Friday, May 15. Just go to mkefilm.org/sofacinema.