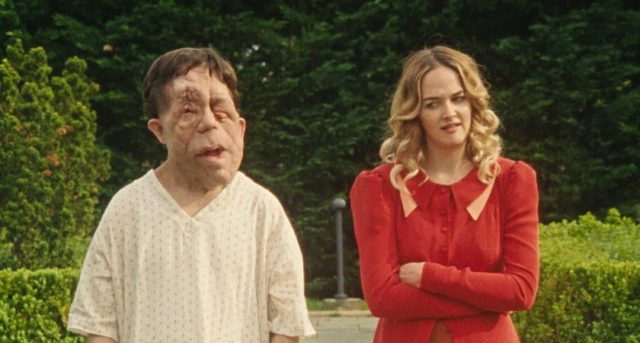 On today’s episode, they’re previewing one of the most anticipated films of the whole festival, the indie comedy “Chained For Life,” about an unlikely romance that blossoms on the set of a B-horror film. It screens at 6:30 p.m. at the Oriental Theatre.

“Hollywood’s representation issues are tackled head-on in the funny and humane, award-winning festival darling Chained for Life. Teeth’s Jess Weixler stars as a young ingenue working on a European art-house horror film shot in a partially abandoned hospital. She strikes up a tentative friendship with her disfigured co-star (a wonderful performance from Adam Pearson, last seen being seduced into an inky void by Scarlett Johansson in 2014’s Under the Skin), as the characters in the lurid B-film they’re working on—replete with a mad German doctor performing secret medical experiments—pursue a romance.

Very rarely does a film come along that can traffic in melancholy, surrealism, and comedy so effortlessly—think Lynch’s Eraserhead by way of Altman’s The Player and you’re on the right track. Director Aaron Schimberg keeps you constantly off-kilter, expertly jumping between scenes from the film-within-a-film to scenes about filming the film-within-a-film and even to actors taking a break from the film-within-a-film to workshop their own separate-film-outside-the-film-within-a-film (dizzy yet?). Raising important and discomforting questions about representation and how we so casually dehumanize those different from us, this acerbic heartwarmer is “an American indie of unusually big ideas and aesthetic ambition” (Film Comment) that is nothing short of “extraordinary” (The New Yorker).”