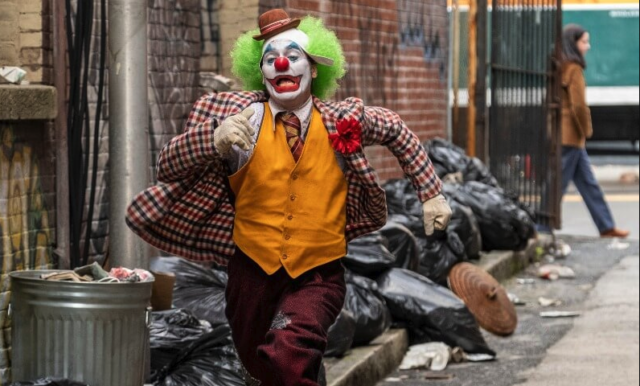 Todd Phillips made a gritty, dark drama about The Joker? The Joker from the Batman comics? Isn’t Phillips the guy who makes potty mouth comedies about drunk white guys? Yeah. He is. But, then, this happened.

“Joker” is the story of a mentally ill man who is down on his luck and stepped on by his coworkers, his mother and the public at large. He’s an aspiring stand-up comic with no skills and no prospects. During one of his regular beatings by strangers on the street, he finally fights back and discovers a feeling that had been hidden not-so-deeply inside.

The film gives the iconic comic book villain the whole dark-and-gritty treatment, as we’ve seen with so many cartoon figures, from Batman to Spiderman to Razzy winner “The Fantastic Four.” But this one has some extra baggage to say the least. Though set in the ’80s, the film makes a connection with our troubled current times and tries to find a touchstone with a maniacal murderer as hero.

We had a lot of questions with this one. Can themes of mental illness and societal unrest, which connect all-too-firmly in our current climate, be tackled in a film about a comic book villain? Can the maker of “Old School” handle such an ambitious and complicated message? Can Joaquin Phoenix really dance?  Tune in to Cinebuds to hear our takes. Same Bat-time. Same Bat-channel.