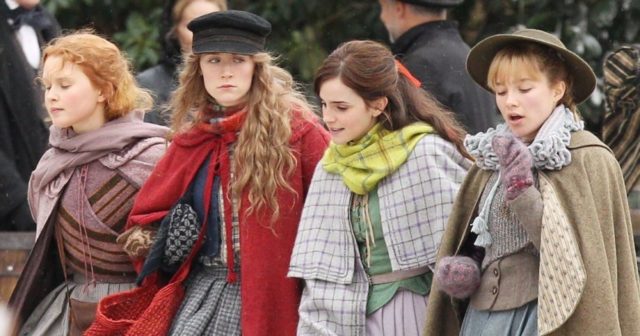 On this week’s episode, we dig into Greta Gerwig’s heartfelt adaptation of “Little Women.” Hear our thoughts below.

Sure, everyone’s out there watching these blockbusters like GIANT DUDES, or BIG FELLAS. Or even that brand new HEFTY GENTS. But, not us. No, we’re gonna talk about LITTLE WOMEN. Deal with it!!

That’s right! This week on Cinebuds we’re talking about Greta Gerwig’s newest film, based on the classic American novel by Louisa May Alcott. The story of the March sisters and their family. The sisters are all living their lives in their own way and bucking conventions all the while. It’s a story with no real villain and a lot of love and friendship and compassion — a nice change.

“Little Women” has been filmed at least six times as a feature film and countless times as a mini-series, made-for-TV film, theatrical production, etc. How will Gerwig’s version set itself apart? The first hint is the stellar cast. Saoirse Ronan plays the best March sister, Jo. You’ve got Laura Dern as the mother. You’ve got Timothée Chalamet as Laurie. And since Meryl Streep is contractually obligated to be in all movies, you’ve got Meryl Streep as their sweetly grumpy Aunt March. Whew!

The film, while adhering to the time period wonderfully, also has a contemporary feel that the actors bring to it. It makes the film even more relevant than it usually is.

Do you like your indie literary adaptations with a variety of clever, strong, brave and funny characters who occasionally die of scarlet fever? Listen to the podcast to see if we do, too.