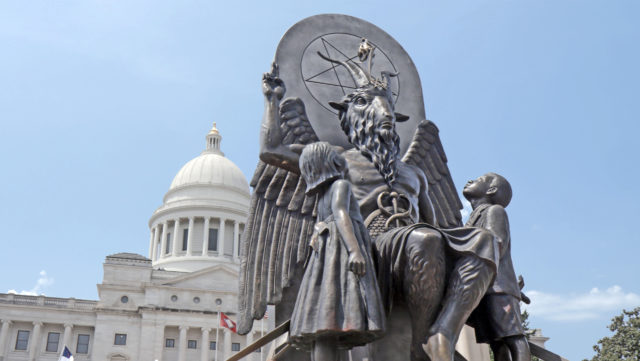 Read more and listen to the full podcast episode below to hear us talk about “Hail Satan?”

While it documents the history of The Satanic Temple, Penny Lane’s new documentary isn’t just about Satanism. It’s about outsider culture, minority repression and the importance of standing for something.

The film follows members of the Satanic church as they protest a 10 commandments statue placed on government property in Arkansas, raising issues about the separation of church and state. The Satanic Temple petitions to get its own Satanic statue placed next to the Christian one. Through this process The Satanic Temple establishes its own nontheistic religion, complete with its own dogma and Seven Tenants of Satanism.

After completing “Hail Satan?,” Lane actually became a member of The Satanic Temple, and it’s easy to see why: The documentary makes a compelling case for Satanism as a symbol of rebelliousness and non-conformity, as well as for the Satanic church itself, which gathers likeminded believers and creates a true community around equality, acceptance and other core American values. They even created an afterschool program for kids.

And like Lane, we walked away from the movie with a very different opinion of Satanism. Listen to the episode for our full thoughts on the film — which, without spoiling too much here, we’ll say that we loved.