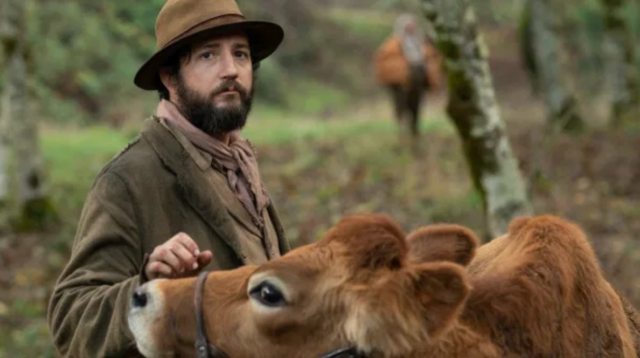 “First Cow” is a new film from director Kelly Reichardt. It is from production house A24, which has made “Uncut Gems,” “Hereditary” and other truly beautiful and thoughtful films. It was in theaters for a blip. Its doomed theatrical release was on March 6, 2020, but it has now come to the internet where we rented it on Amazon for six dollars and you should do the same because we LOVED this movie.

I had heard some mixed reviews. When people talk about Kelly Reichardt they use words like “meditative” and “patient.” I heard one critic say that the movie suffered from watching it at his house with his cell phone by his side. However, we did not have these problems. When it was over Kpolly and I thought about running it back and just starting it again. Sure, it is “quiet” and “thoughtful,” but it really is so much more. I don’t want to say too much here so you should listen to the conversation ESPECIALLY if you have already seen it. Or, watch it, and then listen to the conversation. It’s worth the six bucks. And since “First Cow” implies the existence of a second cow, we can’t wait for the sequel.