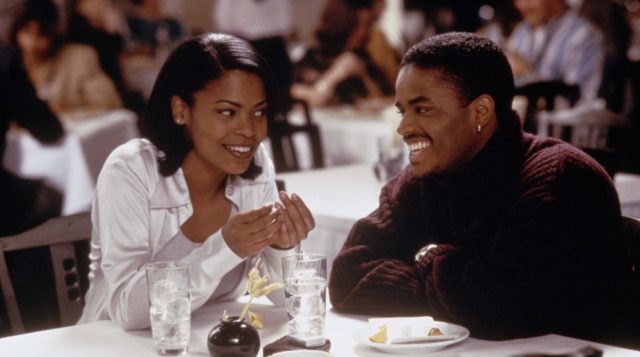 In addition to new films, Black Lens will celebrate the 20th anniversary of the film, “Love Jones” with a 35mm screening of the classic movie starring Larenz Tate and Nia Long and directed by Theodore Witcher. There will also be a screening of Milwaukee Film Board Member and Academy Award winner John Singleton’s new documentary about the L.A. Riots called “Let It Fall: Los Angeles 1982-1992.”

The lineup also includes a documentary on HBCU’s (Historically Black Colleges and Universities), a series of shorts that tackle family issues and more.

A Black Lens Kickoff Party, presented by Froedtert & the Medical College of Wisconsin, will take place at 88Nine Radio Milwaukee on Saturday, September 23. The event is free and open to the public. The Black Lens program is sponsored by Jammin’ 98.3.

Check out the films and some of the trailers below.

Three short days separate 18-year-old Caesar from leaving Brooklyn for a prestigious upstate university. But between his long-time girlfriend calling it quits and his crew already planning for his imminent exit, Caesar finds himself pulled between the comfort of a world he’s always known and the exciting promise of a bright future. A vibrant, textured work that powerfully captures the dizzying nuance of teen love and the thrum of a rapidly-changing borough, 72 Hours is an exacting portrait of what it means to be young, gifted and black.

72 Hours: a Brooklyn Love Story? - Trailer from The Color Machine on Vimeo.

It’s a story whose reverberations will be felt across the political landscape for many years to come: ACORN, America’s largest grass-roots community organization (teaching low- and medium-income families across the nation to advocate for themselves), shuttered by a pair of amateur journalists posing as a pimp and prostitute, igniting a media firestorm that helped spawn the Breitbart News empire. This real-life political thriller does much to explain our current divisive state, persuasively drawing a line from ACORN’s bankruptcy to our polarized present and its constant cries of “fake news.”

An evening of shorts that tackle the notion of family in all of its complicated glory – whether it’s protecting the ones you love, leaning on them for support, bringing each other together or tearing each other apart, these shorts (alternately funny, thrilling and sad – just like family itself!) have something for everyone!

This second series of Black Lens shorts at this year’s MFF showcase the infinite possibilities in the world of contemporary black filmmaking – watch these characters undergo a journey of discovery (in search of acceptance, love, recognition, and more) while covering a wide array of topics ranging from gun violence and love to classic folklore and the radical art of self-acceptance. A fascinating night at the movies.

One unforgettable moment in a young man’s childhood in Detroit creates two startlingly alternate paths: in one, he’s Rasheed, an ambitious architect seeking to ascend the corporate ladder, while in the other he’s Sheed, a drug kingpin who has remained on the streets of his childhood, seeking to exert his will over them. A gripping urban crime thriller with a unique approach to cinematic storytelling, Destined weaves between these two stories, each echoing and diverging from one another in mysterious ways, with both Rasheed and Sheed moving inexorably towards their ultimate fate.

25 years later, the Rodney King verdict and the subsequent riots are still etched in our minds. Culminating a decade of struggle with a justice system unequipped to deal with issues of race and class, the riots seem both entirely preventable and utterly unavoidable. Director John Ridley (Jimi: All Is By My Side, MFF14; Milwaukee Film Board Member) avoids simple moralizing or tidy conclusions as he examines the lead-up to and events of that day, instead letting those who lived through the experience speak for themselves in this heartbreaking portrait whose power is only magnified on the big screen.

American volunteer Micah sees his teaching job in Ghana as an opportunity to reconnect with his ancestral roots while also helping young Ghanaians reach their fullest potential. But when 14-year-old Tuigi, one of his brightest students, must abandon her studies in exchange for a life as a sex slave as recompense for her father’s transgressions, Micah finds himself stuck in the middle of a culture clash, desperate to extricate Tuigi from the cycles of history and tradition that threaten to swallow her whole.

Nina (Nia Long) is not looking for love when she meets Darius (Larenz Tate) at a poetry slam. Despite the scorching chemistry that instantly ignites, both insist the relationship is purely physical and certainly not a case of the love jones. A witty, sexy portrait of young Black love and romance (set in a middle-class, bohemian milieu that Hollywood still struggles to showcase 20 years on) that is a generational classic, this film will receive a rare 35mm screening at the historic Oriental Theatre!

Tell Them We Are Rising: The Story of Black Colleges and Universities(USA / 2017 / Director: Stanley Nelson)

Over the course of 150 years, Historically Black Colleges and Universities (HBCUs) have paved the way for Black intellectuals, revolutionaries, and artists alike to pursue higher education and defy stereotypes among their peers in an unapologetically Black environment. Now the remarkable story of their role in African-American history is finally told. Fest alum Stanley Nelson (The Black Panthers: Vanguard of the Revolution, MFF15) returns with this captivating panorama of HBCUs from their conception to the modern day, a stirring portrait of perseverance in pursuit of knowledge.

28-year-old Jennifer Brea is in the prime of her life as a PhD student and soon-to-be newlywed, when a sudden fever leaves her perpetually bedridden and desperate for answers. A host of unsatisfactory diagnoses lead her to discover an abandoned online community of those similarly afflicted (with what is commonly known as Chronic Fatigue Syndrome). A medical mystery nestled in an intensely personal portrait of a husband and wife’s healing journey, Unrest shines a light on a condition that confounds the medical community through its panoply of personal perspectives on suffering.