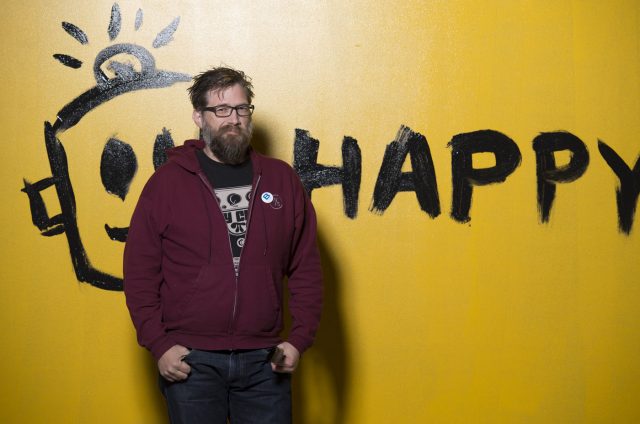 58 locally-made films to be presented; $12,500 to be awarded in juried prizes

Today, Milwaukee Film Festival announced the film lineup for the very popular Cream City Cinema program. The program showcases some of the best feature and short films made by Milwaukee-based filmmakers.

The program also includes the short film series The Milwaukee Show (I and II), and The Milwaukee Youth Show, which highlights films by very talented 18 and under filmmakers.  16 select local music videos will also be screened for the Milwaukee Music Video Show.

This year’s program will include one feature-length film – “Christopher Darling” and three feature-length documentaries – “From Mass to the Mountain,” “HAPPY: A Small Film With A Big Smile,” and “There Are Jews Here.”  There will also be two double-feature mid-length films – “REVZA” & “Naneek;” and  “Tolkien & Lewis: Myth, Imagination & The Quest For Meaning” & “Behind the Pearl Earrings.”

In addition to the $5,000 Cream City Jury Award, two new awards will be added to this year’s program – Cream City Cinema College Filmmaker Award and the Milwaukee Music Video Award.

The Cream City Cinema College Filmmaker Award winner will be selected by a jury which will award one film made by a currently enrolled undergraduate film production student or 2016 graduate with a $2,500 cash prize. MLB pitcher and Milwaukee Film programmer and supporter John Axford is funding the award. The Milwaukee Music Video Award is a jury-selected cash prize of $5,000 which will be given to the local filmmaker and musical artist who have collaborated to create the best music video in The Milwaukee Music Video Show Program, which began in 2015.

Check out the full line-up for Cream City Cinema below.

Meet Christopher Darling, the alcoholic, misanthropic, womanizing lead singer of the modestly popular rock band The Pills. As Darling hits the road in support of his newest album despite a tepid response from audiences and critics alike, the gigs blend together into one long downward spiral into debauchery, with Darling becoming intimately acquainted with each city’s fine selection of bathroom stalls, recreational drugs, and groupies. But as his self-destructive streak grows wider and the audiences grow smaller, Darling is in danger of losing himself completely. A darkly comedic character study with a heavy dose of Bukowski, Christopher Darling is a bruising portrait of self-sabotage.

Eastern Panama finds itself in dire straits—impoverished and struggling to combat the government corruption that has left citizens decimated by drought and a contaminated water supply, people here are in desperate need of assistance. Enter Ripon, WI’s own Father Wally Kasuboski. Dubbed “Padre Pablo” by the Panamanian locals, he has dedicated 28 years of his life toward developing the infrastructure necessary to bring drinking water to this rural community. An inspiring story of one man’s tireless efforts to bring succor to an exploited people, From Mass to the Mountain is the moving story of a Wisconsinite who has embraced a new home and is passionately working to improve it.

From Mass to the Mountain - Official Trailer from Kurt Sensenbrenner on Vimeo.

Visual artist Leonard “Porkchop” Zimmerman could have given in to the darkness that encroached on him from all sides following the untimely passing of his partner, Brian. Instead, he chose to channel his grief into art, creating numerous paintings of robots involved in exploits that run the gamut from mundane to profound. Out of this grew the “Happy” campaign: the robot drawing that became a worldwide phenomenon as a colorful reminder of the transformational power of embracing joy. HAPPY is an irresistible and inspirational portrait of one man’s journey through the storm in order to share with us the sunshine he found on the other side.

For those about to watch Milwaukee rock, we salute you: the local film and music scenes combine in a gorgeous collision for The Milwaukee Music Video Show, a celebration of the myriad art talent our community has to offer. Diverse artists (Webster X, Maritime, Group of the Altos, Lex Allen) combine with a vast array of visual techniques (live action, animation, experimental) to showcase the best and brightest across multiple disciplines.

The Milwaukee Show I

Nobody brews up a refreshing batch of storytelling quite like our own local filmmakers, and this year’s edition of The Milwaukee Show I is no different. Stories include a mysterious message at a late-night radio station, an ancient Hindu fable brought to life through animation, Mark Borchardt as an L.A.-based guru, and a true crime story from our own community.

With simply too much quality for one program, The Milwaukee Show II brings us even more lovely local selections. Stories include a family of zombies sitting down to a fancy dinner, the dark history of forced sterilization in the United States, and the touching story of a terminally ill woman using her remaining time to argue with her sister about the hottest cartoon character.

These kids are more than all right: see work from our local Spielbergs-inwaiting, a youth-driven showcase that highlights the diversity of talent and visions Milwaukee’s young people have to offer. We at the Milwaukee Film Festival believe the children are our future, but if these dynamic works are any indication, the future has already arrived!

UWM instructor/filmmaker Emir Cakaroz returns to his native Turkey to spend some quality time with his widowed mother. It is a poetic, observational portrait (capturing both the intimate and mundane) of not just the relationship between a mother and her son but also the life of a widow in a patriarchal society.

Vietnam veteran Tim Keenan returns to the land that has haunted him. In search of peace of mind and forgiveness, he revisits the battleground of Dak To and meets with former enemies in order to acknowledge the humanity of the Vietnamese people he fought against.

Director Brad Lichtenstein (As Goes Janesville, MFF2012) tells a touching story of America’s disappearing Jewish communities and the hardworking people striving to keep them intact and ensure that their cultural legacies are not lost. Come with us to Butte, MT, Laredo, TX, Dothan, AL (where a millionaire offers $50,000 to families willing to relocate and join their dwindling populace), and Latrobe, PA, as we witness more than 1 million American Jews living in small, once-thriving communities, bound together by faith and striving to keep the Jewish spirit alive.

There Are Jews Here - Trailer from Seventh Art Releasing on Vimeo.

Tolkien & Lewis: Myth, Imagination & The Quest For Meaning I Behind the Pearl Earrings

At Oxford University in 1931, a historic debate took place between two literary legends, The Lord of the Rings’ J.R.R. Tolkien and The Chronicles of Narnia’s C.S. Lewis, regarding myth, inspiration, and truth. It was a debate so powerful it converted former atheist Lewis to Christianity. Varied scholars and experts help color in this momentous meeting of the minds.

The following locally-made short films will precede locally-made features in the Cream City Cinema Program. See the Program Book for their pairings.