‘The Mustang’ is the movie you should see this weekend

‘The Mustang’ is the movie you should see this weekend 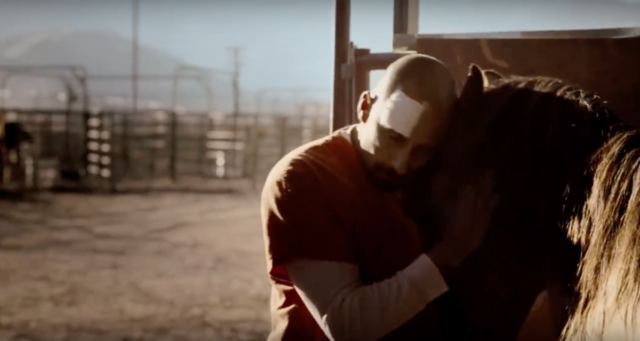 The Mustang is the directorial debut of Laure de Clermont-Tonnerre, and it stars Matthias Schoenaerts. It is based on a true story.

Plot: The Mustang takes place in prison. Schoenaerts’ character, Roman, just got out of solitary confinement and states he’s not good with people. The prison psychologist, played by Connie Britton, assigns him to the outdoor duty of shoveling up after the horses the prison has for their Wild Horse Inmate Program, which is a real program in which horses are taken in and domesticated by prisoners and then auctioned to law enforcement and ranches. The head of the program in the film, Myles, played by Bruce Dern, sees Roman’s interest in the horses and brings him into the program. Through the program you see Roman rehabilitate. He must be patient. Lashing out, as he finds out, will not work with horses and he must earn their trust and respect. This program helps him work through his own issues he had yet to confront.

Hot takes: We loved this movie. It may sound a little Disney-ish in the description, but this was a gritty drama that excelled in it’s character building.

The movie spends so much time with Roman. When we first meet him, not only is he uninterested in talking to people, but also he is pretty hostile. Through the work with horses, you see his character incrementally change.

By the end we both cried.

Highlights: There was a scene where a group of prisoners are in a kind of group therapy session and the psychologist asks them to go around and say how long they thought of the crime before they committed it and then how long they have been in prison. The longest answer for the first question was 22 seconds and the longest answer for the second question was over half a lifetime.

“The Mustang” is now showing in Milwaukee theaters now. Listen to the full podcast episode above for our hot takes and watch the trailer below.

Read more and listen to the full podcast episode below to hear us talk about The Mustang.