‘Portrait of a Lady,’ now streaming on Hulu, is all style and emotion

‘Portrait of a Lady,’ now streaming on Hulu, is all style and emotion 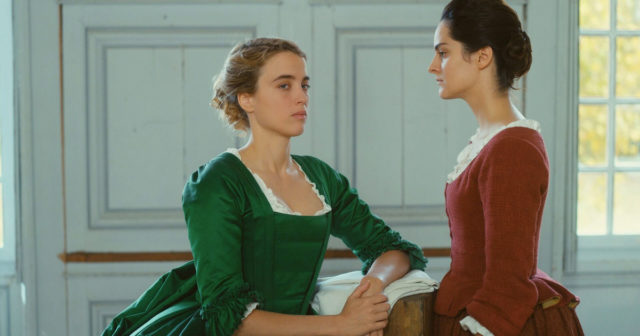 This week on Cinebuds, we’re safe at our homes and recording remotely.  Kristopher is wearing tissue boxes for shoes and Justin has made a tin foil hat. But, despite this, we’re doing fine. So fine, in fact, that we decided to discuss a film that was just released to stream on Hulu, “Portrait of a Lady on Fire.”

Director Céline Sciamma tells the story of a painter who is commissioned to do the wedding portrait of a young woman who has just left the convent.  She’s a reluctant bride to be and the painter must paint her without her knowing. The two women slowly develop a forbidden connection.

This much-talked-about film from late last year was a common sight on innumerable end-of-year lists from critics and fans alike. It premiered at the 2019 Cannes Film Festival where it won the Queer Palm, which is an award that started in 2010 to highlight queer cinema at the French festival.  Sciamma is the first woman to win this award. And then she went on to win 43 more awards. That’s roughly 43 more awards than I’ve ever won for a film. So, not too shabby, huh?

Style and emotion are at the forefront of this movie. The performances are all in the eyes. And, in some ways, in the armpits.  (You’ll have to watch to understand that one…)

This and other recommendations for what to watch await you in the podcast. Don’t forget to share, subscribe and rate Cinebuds online. That helps us get into heaven!