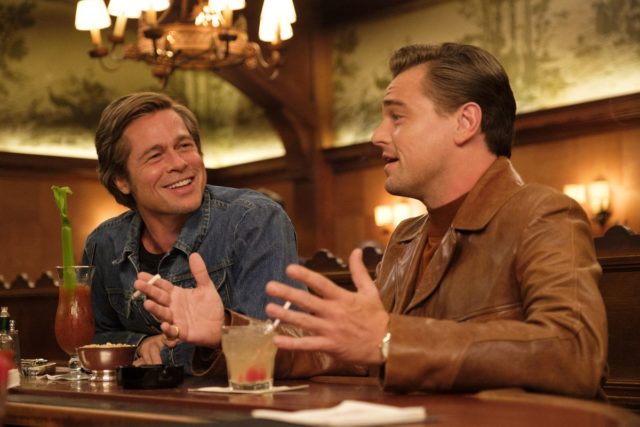 Listen to this week’s episode to hear our thoughts on Quentin Tarantino’s latest love letter to cinema, “Once Upon a Time in Hollywood,” which we had mixed thoughts about but has a lot to recommend. It’s a movie you won’t regret seeing in the theater.

Quentin Tarantino has rolled out his penultimate film with “Once Upon a Time in Hollywood” (Did I have to look up the word “penultimate?” Of course I did. But, I think we can all agree it was worth it).

Yes, this will supposedly be the director’s second-to-last film in his career. And he has chosen to to focus on the changing Hollywood landscape of the late ’60s, which was accompanied by a sense of doom as we lead up to a tragedy that would change more than just the Hollywood landscape.

The bulk of the film focuses on our mega-stars Leonardo DiCaprio and Brad Pitt as a falling TV star and his stunt man/best friend. Their relationship grows and changes as we see DiCaprio’s break down at the hands of a new generation of TV and film culture that he has trouble adapting to. Margo Robbie appears as the actress Sharon Tate, whose fate at the hands of the Manson Family creates another branch of our story.

Tarantino offers up an alternative history of the characters and events of this fascinating era. You’ve got your Sharon Tate, your Charlie Manson, your Bruce Lee and your Steve McQueen — all mixed in with the Tarantino creations to populate a world of fact and fiction.

But, what’s the real takeaway here? What should we be left with when it’s all said and done? Well, we think…. Watch more Albert Brooks movies! “Is he involved in this film?” No, he is not. Yet somehow we found our way to him through this podcast. Take a listen to find out what the hell I’m talking about!