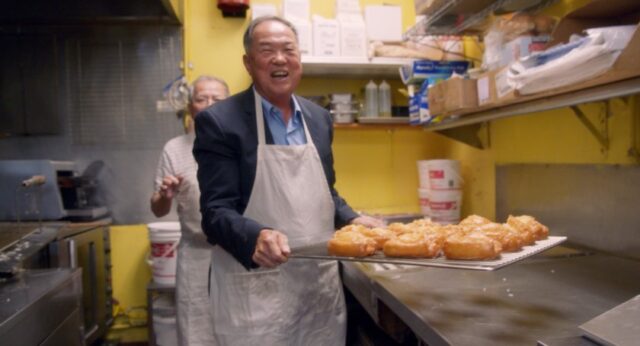 “The Donut King” was a runaway fan favorite at this year’s Milwaukee Film Festival — so much so that The Oriental Theatre is bringing it back to their Sofa Cinema platform for all those who missed it or who want to watch it again, and there is good reason to do so.

As a documentary it is successful because it combines a lot of things that would make for a great doc on it’s own, but they are all part of one great story. It’s one part American Dream. The Donut King himself is Ted Ngoy, a man who started with nothing and built a donut empire in LA in the 1970s. Because it is about donuts in LA it is also an informative foodie doc about a niche food subculture. And on top of that, it’s a bit of a history of how America handles refugees and a history of Cambodia, where Ngoy came from. Because of this combination you get the story arc of a great rise and fall, an inspiration, the corruption of greed, a legacy that is still visible today, and a bunch of great facts. Who would have known that Duncan Donuts cannot break into Los Angeles because Cambodian run mom-and-pop donut shops rule the market?

It’s informative, inspirational, tragic and very well done. In the podcast Kpolly goes into some kind of weird theory about Honeydip Donuts and a delivery man he had recently. I am not even touching that one here, and of course, we talk about what else we have been watching. Check the podcast below.