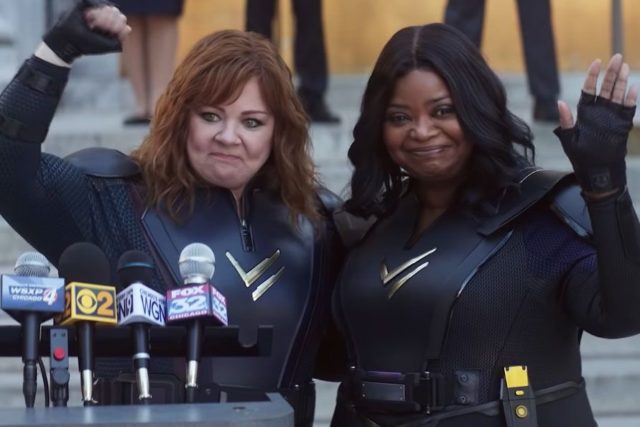 Kpolly here. While we wait for them to bring my favorite kids cartoon (“Thundercats”) to the big screen, we will have to settle for all other Thunder-related films to watch and review. This week on Cinebuds we discuss “THUNDER FORCE.”

No anthropomorphic cats in this one. This is a comedy superhero film starring Melissa McCarthy and Octavia Spencer as childhood best friend who, as adults, gain super powers in order to fight a world that has only super villains. Jason Bateman and Bobby Cannavale round out the supporting cast.

It’s another in a line of films by wife and husband team of McCarthy and director/actor Ben Falcone. The formula is to set up the comedy genius of McCarthy to shine with a loose structure to give her room to go crazy! Does that work?

The film, along with several of the team’s collaborations in the past, is panned by the critics. Is it understandable or is there something of a cult appeal to these pairings? It’s a mystery that only WE can solve!!

We’ll chat about the film and what else we’ve been watching lately. Don’t forget to check our our “Cinebuds LIVE” episode next Wednesday, April 21 at 7 p.m. on our respective YouTube or Facebook pages.