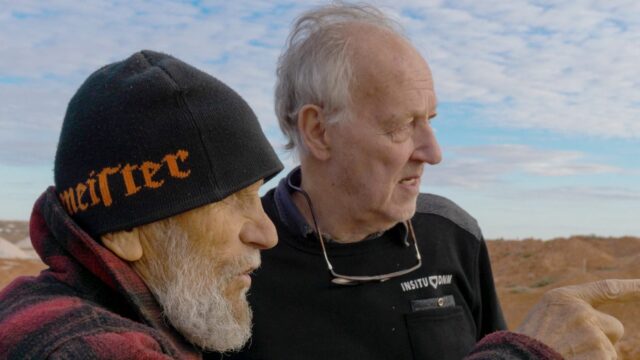 “Nomad” is a new documentary from Werner Herzog. Werner Herzog is probably more famous for being Werner Herzog than he is for any iconic films that he’s made. His kind of strained and slow delivery in a gentle German accent is immediately iconic, and, in 2020 he’s probably best known for his role as The Client in Star War’s “Mandalorian” than he is for his decades long kinship with Klaus Kinski in movies like “Aguirre, the Wrath of God,” or “Fitzcarraldo” or his stunning documentary work. But, hopefully that role and his celebrity will do to others what it did to me and Kpolly, got us to go back and watch his work.

In his heart, the central feature of most of Herzog’s work is anthropology. In this documentary he says that both he and Bruce Chatwin share a “search for strangeness.” Bruce Chatwin was an anthropologist from the time he was born until his untimely death at the age of 49 years old in 1989. Chatwin and Herzog were friends and their interest in the world and it’s culture intersected frequently and this documentary is part love letter to this male friendship, part ethnography and part cabinet of curiosities.

More chat on Herzog, this particular doc, Chatwin, and suggestions of other things to watch if you like this sort of thing in the pod. Check it out.