Why Scorsese’s ‘The Irishman’ doesn’t work

Why Scorsese’s ‘The Irishman’ doesn’t work 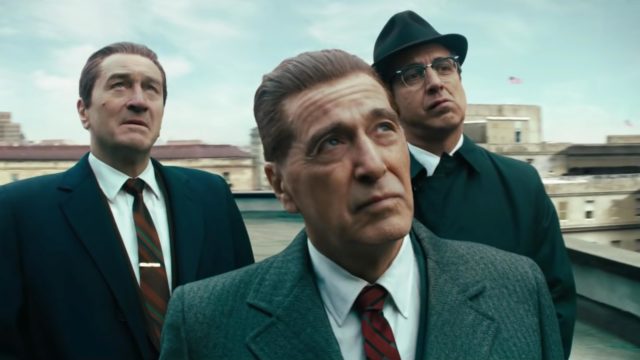 This week’s episode tackles the film that lit up Netflix accounts over the Thanksgiving weekend, Martin Scorsese’s mafia epic “The Irishman.” Stream and read about it below.

Kpolly is out this week, so it’s just me (Justin) reviewing Martin Scorsese’s “The Irishman.”

“The Irishman” is Martin Scorsese at his Scorsese-ist. It’s a big ode to New York and a certain kind of man. It features three Martin Scorsese classic actors, Robert DiNero, Al Pacino and Joe Pesci (not to mention Ray Romano and Harvey Keitel, among others.) It clocks in at a whopping 209 minutes, or three and a half hours. It spent about a week in “select” theaters (including Milwaukee’s Oriental Theatre!) before moving to Netflix, where plenty of people, including me, watched it over Thanksgiving recess.

“The Irishman” is based on “I Heard You Paint Houses,” the narrative non-fiction book written by former homicide prosecutor, investigator, and defense attorney Charles Brandt. The screenplay is written by Steven Zaillian who has written “Schindler’s List,” “The Girl with the Dragon Tattoo” and “Gangs of New York.” “The Irishman” tells the story of Frank Sheeran, a hitman for the mob as he recalls his activity in ’60s and ’70s New York and the relationship between him, the mafia and Jimmy Hoffa.

I did not like this movie. I go into exactly why I didn’t in the podcast. Listen below.