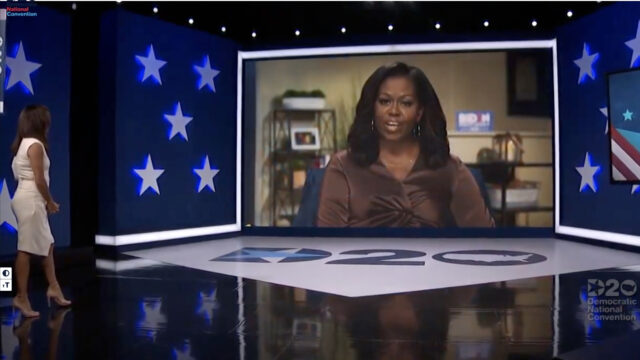 The Democratic National Convention kicked off Monday night in its first completely virtual, made-for-TV incarnation. It was unlike any convention night seen in years past. The most glaring difference: the absence of delegates and an audience.

That presented hurdles that the party tried to vault with a highly produced event that felt, at times, like a political infomercial mixed with a bit of “We Are The World” — and included one standout speech from former first lady Michelle Obama.

Most of the segments were prerecorded with some live elements, including actress Eva Longoria emceeing. The two-hour event accomplished several things Democrats were looking to do, including laying out a more hopeful — and diverse — vision for America than will likely be seen next week at the Republican National Convention. It also hit President Trump on two of the major issues facing the country — the coronavirus pandemic and the reckoning over racial injustice.

There was a lot to digest. Here are seven takeaways:

The former first lady delivered a sophisticated rebuke of President Trump that hit him thwack and branches.

“He has had more than enough time to prove that he can do the job, but he is clearly in over his head,” she said. “He cannot meet this moment. He simply cannot be who we need him to be for us. It is what it is.”

That last line, “It is what it is,” hearkens back to the president using those same words to describe the coronavirus death toll in the country.

And Obama nailed the virtual format. She was seated, comfortable, emotive and soaring in her delivery. Obama acknowledged many voters are disaffected with politics. “I get that,” she said. She hit the seriousness of the moment.

“If you think things cannot possibly get worse, trust me — they can and they will if we don’t make a change in this election,” Obama said. And she made a direct appeal for people to get out and vote.

“We have got to grab our comfortable shoes, put on our masks, pack a brown bag dinner and maybe breakfast, too,” she said, “because we’ve got to be willing to stand in line all night if we have to.”

2. But she and the entire night could have benefited from a crowd

Obama’s speech was genuine and sober and serious. Sitting in a living room and saying, “You know I hate politics,” was powerful. But imagine what that speech would have been like with a crowd. Searing — and soaring.

There were other moments that would have benefited from a crowd, as when Kristin Urquiza from Arizona — whose father, a Trump supporter, died of the coronavirus — delivered this line: “His only preexisting condition was trusting Donald Trump, and he paid with his life.”

There’s nothing Democrats really could have done about the lack of a crowd because of the pandemic. Republicans are going to face a similar predicament next week, but in the words of the president: It is what it is.

3. Democrats started to build a case based on the character of Joe Biden

One of the key tasks of a convention is to get voters excited about the candidate. Joe Biden is facing some deficiencies in that regard. So the Democrats are using this virtual platform to tell Biden’s story, highlighting what they believe are his decency and empathy in contrast to Trump.

Democrats started to do that Monday night in small and large ways. They described Biden as someone who is “real” and someone of “character.” Obama described Biden as “a profoundly decent man, guided by faith” and alluded to the tragedies he’s faced in life with the death of his first wife and daughter in a car accident decades ago, and more recently the loss of his son Beau to cancer. “Joe knows the anguish of sitting at a table with an empty chair,” she said.

As to the kind of president he would be, Obama noted: “[H]e listens. He will tell the truth and trust science. He will make smart plans and manage a good team.”

All of that is important in filling in the picture of who Biden the person is, to help insulate him from attacks that will be coming from his opponents.

4. Democrats provided Republicans a bridge (or fork in the road) to vote for Biden

One of the aspects of Monday night’s convention that caused progressives some consternation was the inclusion of several Republicans, including, most notably, former Ohio Gov. John Kasich, who delivered his speech standing at a fork in a road, a visual metaphor if ever there was one.

They aren’t exactly the most prominent Republicans in the current version of the GOP, but putting their names behind Biden was, at the very least, a degree of taunting ahead of next week’s GOP convention. It also could have provided some Republicans a bridge, or a directional sign at that literal fork in the road, to vote for Biden.

“Many of us have been deeply concerned about the current path we’ve been following for the past four years,” Kasich said. “Continuing to follow that path will have terrible consequences for America’s soul because we’re being taken down the wrong road by a president who has pitted one against the other.”

5. But there was also something of a mixed message — is Biden a moderate, or as progressive as FDR?

Kasich’s appearance presented a conflicting message to viewers. He said he has confidence Biden won’t “turn sharp left and leave [Republicans and independents] behind.”

“I don’t believe that because I know the measure of the man: reasonable, faithful, respectful,” Kasich said. “And you know, no one pushes Joe around.”

But then Kasich was followed by Vermont Sen. Bernie Sanders, who noted in his speech that his own policies had been seen as radical before he ran for president but now are mainstream within the Democratic Party.

On Sunday, Sanders touted that if Biden implemented recommendations of joint policy task forces between Biden’s and his supporters, then “Biden will become the most progressive president since Franklin Delano Roosevelt.”

So, which is it? Will Biden not be pushed around by the left, or will he be the most progressive president since FDR?

6. Sanders is all in, and nothing unifies like a common enemy

All that said, Sanders made a strong and effective appeal to his voters to keep their eyes on the prize, that the most important thing this year is defeating Trump.

Sanders extolled Biden’s virtues and noted that he would lead the fight on Day 1. It’s very clear that Sanders and other progressives see Trump as a clear and present danger. In 2016, many on the left couldn’t imagine Trump would win, but now he’s been president for 3 1/2 years, and what he’s done and could do are very real threats to progressive causes.

Four years ago some cast protest votes against Hillary Clinton thinking she wasn’t progressive enough, but also thinking she’d likely win. Michelle Obama had a rejoinder for that.

“[T]his is not the time to withhold our votes in protest,” she said, “or play games with candidates who have no chance of winning.”

7. Trump will do everything he can to steal Democrats’ thunder this week

Traditionally, the opposing candidate lays low during the convention of the other candidate and lets them have their week. But there’s nothing traditional about this president, and Trump is already showing he’s going to do everything he can to pull attention away from Democrats.

On just the first day of the Democratic National Convention, Trump held three rallies in an effort to eclipse the star power of Michelle Obama et al.

But Trump will be busy, too, signing a proclamation at the White House on the 100th anniversary of the 19th Amendment, which gave women the right to vote. Then he takes to the road to see border wall construction in Arizona.

And that’s not all — on Air Force One on Monday, Trump told reporters that he would be pardoning someone “very, very important” Tuesday, but it wouldn’t be his former national security adviser Michael Flynn or former NSA contractor and whistleblower Edward Snowden. So who?

Like any good reality show producer, Trump is leaving the assembled press corps — and the country — with just that tease to the next episode.