Amid a pandemic and a dire budget crunch, Milwaukee County Parks reopens as best it can

Amid a pandemic and a dire budget crunch, Milwaukee County Parks reopens as best it can 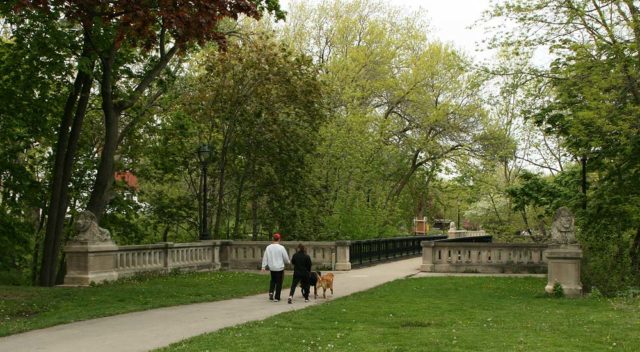 Milwaukee has always valued its parks system, but in the midst of a public health crisis that’s rendered many shared indoor spaces unsafe, the county’s outdoor areas are more integral than ever. The parks are one of the few places left in the city where you can feel a sense of relative normalcy.

Milwaukee County Parks department has been doing its best to meet the demand for outdoor recreation while navigating the restraints of the COVID-19 pandemic. Golf courses, tennis court and basketball courts are back open, as are dog parks, playgrounds and outdoor fitness areas. Beaches and trails are open, too, and they’ve been as busy as you’d expect.

Yet this is far from an ordinary summer for the parks system. Fireworks, concerts and festivals have been canceled. Indoor facilities and pools are closed, as are bathrooms. And, as Milwaukee County Parks Deputy Director Jen Francis explains, the department is constantly preparing for the possibility that things could change.

“We are working around the clock to keep up with where we are at any given moment, because we are in such unknown territory,” says Francis. “Reopening isn’t a once-size-fits all decision, and nothing is black and white. There’s a lot of complexity in the decision making process. Sometimes the public really wants one thing, but that might not be what’s safe in the moment. We experienced some of that when we had to close the playgrounds.”

A ‘desperate and dire’ staffing situation

The pandemic has also hit the parks’ budget hard. The department generates most of its operating budget through fees, but between the cancellation of special event, the delayed reopening of golf courses and the marina and the loss of picnic rentals, it’s had to make painful cuts. In a normal summer, the department hires more than 900 workers to help take care of garbage, litter, restrooms and other maintenance tasks. This year it’s only brought on 200.

It’s because of those severe staffing shortages, in addition to COVID-19, that the parks have had to keep their restrooms locked this summer. Francis says the department is planning on bringing portable toilets to some of the county’s more popular parks to compensate.

The parks department has also assigned 92 staffers who usually handle administrative duties to help with basic parks upkeep, like trash collections. The department is working around the clock to maintain its award-winning parks system, Francis says, but the reality is its staffing situation is “desperate and dire.”

“You’re going to see the grass getting longer, the trash getting fuller, and restrooms less open,” she says.

COVID-19 isn’t entirely to blame for this situation. “This story isn’t new; we don’t have enough staff,” Francis says. “We’ve been living this way for a while, but people don’t understand the story, because they don’t understand how the parks department is funded. Staffing in the parks department over the past 10-15 years has plummeted. We used to have close to a thousand full time staff, now we have 240. Our staff has been amazing in that they’ve been able to give people the feeling they live in a place with a remarkable parks system, but a lot of it is held together with glue and duct tape.”

Still, Francis says, the department will continue to reopen as much as it can. The Whitnall Beer Garden recently reopened, and the Traveling Beer Garden has resumed its 2020 schedule after missing its first two stops. The department is working to reopen the South Shore Park Beer Garden and The Vine in Humboldt Park as well; nothing is official, but announcements could come in the next few weeks. And while pools are closed, Francis believes the department should be able to open its wading pools and splash pads this summer.

“I really want to encourage people just to get outside,” Francis says. “You can do that safely and it really does restore your being. You might not be able to go to the Domes right now, but you get outside and enjoy 15,000 acres of county parks, which is a lot of county land. Visiting may require a little more awareness and planning ahead because the restrooms aren’t open, but the parks are still an incredible resource.”