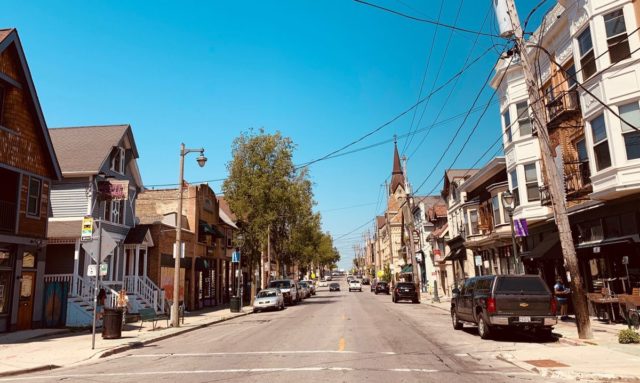 Today, the The Brady Street Business Improvement District announced that this year’s Brady Street Festival has been canceled due to COVID-19. However, the festival plans to return in 2022.

The district also announced a new partnership with Scout Gallery owners Jeff Redmon and Dana Redmon to curate the return of its annual Art Walk event, coming this summer.

The popular event will be held July 10, and will feature artists and musicians from the Milwaukee area, but will be staged with safety in mind due to COVID-19 concerns. In addition, Brady St BID announced its summertime event Sunday Fundays, also in partnership with Scout Gallery, will also return but the largest and most popular event, Brady Street Festival, will be cancelled for this year.

Scout co-owner and local artist Jeff Redmon, is the co-founder and co-organizer of BVGN (Bay View Gallery Night) bringing large crowds to support and nourish the local art and business community for over a decade. He was also an organizer and founding member of Arte Para Todos, which brought hundreds of Milwaukee musicians and artists together to raise funds for school art and music programs.

“Scout Gallery is focused on local art and having fun, so this partnership is a perfect pairing. We love a good market as much as anyone, but we wanted to create something a little different by bringing a local Art Fair to the Brady Street Sunday Fundays. Milwaukee is loaded with talented artists and we are excited to exclusively feature Milwaukee art,” said Jeff Redmon, Scout Gallery co-owner.

Art Walk is an annual tradition on Brady Street where people can expect to see and interact with talented local artists as they create art while both businesses and vendors offer specials. Sunday Fundays will feature an art flair with artists and artisans selling their work in the North Arlington Place area. Local musicians will provide a welcoming ambiance at each Sunday Funday.

“The Brady Street BID is excited to work with Jeff and Dana to host these events in a safe manner, and is looking forward to offering Brady Street Festival next year when it is hopefully safe again to host such a large scale event that is one of Milwaukee’s popular street festivals,” said Rachel Taylor, Executive Director of the Brady Street BID.