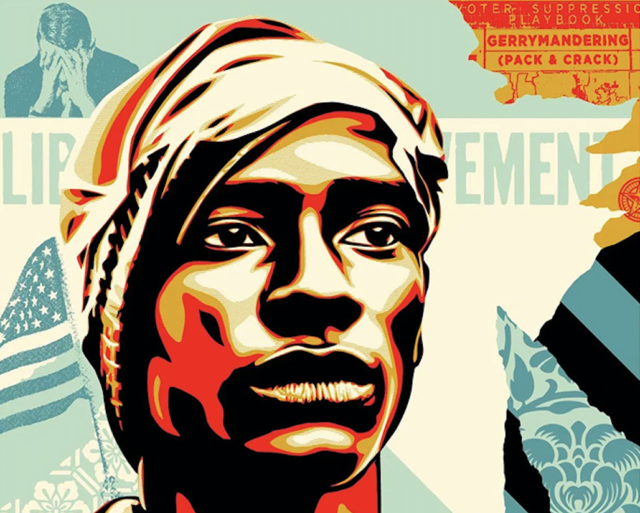 Milwaukee’s Historic Preservation Commission has rejected a proposal to paint a 10-story mural by Shepard Fairey on the south side of the Railway Exchange Building at 229 E. Wisconsin Ave.

Under the proposal by Stacey Williams-Ng’s firm Wallpapered City, the mural from the internationally known artist behind the Barack Obama “Hope” campaign poster would have been installed in time for the Democratic National Convention on Aug. 17.

But the Historic Preservation Commission ruled on Monday that it is not able to approve the mural until the committee has finished guidelines it has promised for approving such projects. Members said they were concerned about making a potentially precedent-setting decision before that framework was in place. The commission gave no indication when those guidelines might be completed.

The commission’s rejection came amid increased scrutiny of the mural, titled “Voting Rights are Human Rights.” More than 100 Milwaukee artists and activists signed a letter to the Historic Preservation Commission objecting to the piece and the selection of Fairey, writing “we find it troubling that our city’s arts institutions and funders would consider giving resources to a problematic white male artist who purports to represent BIPOC people, but has not reached out to Milwaukee’s BIPOC artists.” The letter also cites allegations of plagairism and appropriation against Fairey.

“If the Voting Rights are Human Rights image is supposed to be supportive of voting rights,” the letter reads, “it seems incongruous that the development and consultation of this project lacks sufficient BIPOC leadership.”

The committee says that those concerns did not factor into its decision, however, with Alder Bob Bauman calling the substance of the piece “irrelevant.” Commissioner Sally Petlz complement the piece, saying “the merits of the project I believe are pretty terrific,” according to Urban Milwaukee.

Commission member Patti Keating Kahn, who owns the Railway Exchange Building and abstained Monday’s unanimous vote, voiced disappointment with the decision, saying Milwaukee was missing the chance to bring an internationally acclaimed artist to the city.