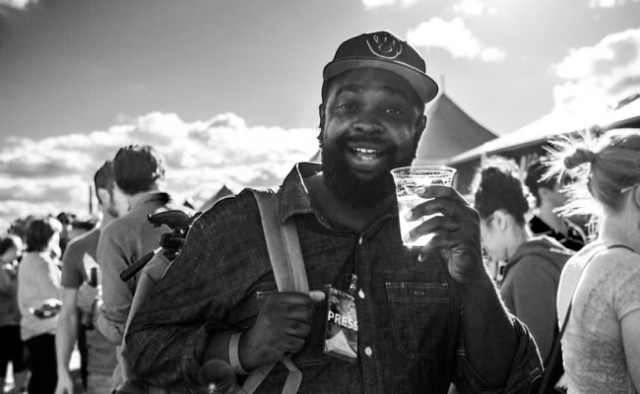 This past Sunday, 88Nine’s photo and video producer Maegan and myself attended the second annual Yum Yum Fest in Madison. If you’re not familiar with Yum Yum Fest, it’s a food and music festival featuring some of Madison’s finest eating establishments, organized by the Madison Area Chefs Network.  This year’s music headliners were Milwaukee’s GGOOLLDD and Minneapolis’ Lizzo.

Shortly after we arrived, we interviewed Lizzo for an upcoming 88 Seconds segment. After the interview, we had some time before our interview with GGOOLLDD to grab some tasty treats.  The first thing I got was Mexican street corn with sockeye salmon ceviche from Merchant. The dish screamed summer and was a refreshing beginning to the festival. Then it was time for something little sweet (because the other lines for food were too long).  We stopped by L’Etoile for the decadent and rich S’More Bacon — marshmallow-topped chocolate cake with graham crumbs and bacon.

My second favorite dish of the day came from A Pig In a Fur Coat. It was a tuna tostada with creme de maritra, with lime, avocado and crispy shallots. The fish came from Sea To Table, where fishermen from small-scale sustainable wild American fisheries connect with chefs from all over the country.

My final dish before our interview with GGOOLLDD was also my favorite: pork rillettes tartine with pickled baby carrots and micro arugula. If you have never had a rillette, think of it as similar to pâté, but made with pork. The dish was made by Brasserie V.  Unfortunately, the dish must have been too adventurous for most of the festival attendees, since it didn’t have the huge lines like other booths that were serving more familiar and trendy dishes. It was such a shame that more people didn’t try it because it was really, really good!!!

I would have tried more dishes, but my belly couldn’t take anymore thanks to the beer. Overall, I enjoyed the vibe of Yum Yum fest with the exception of some of the long lines, which kind of deterred me from trying other dishes. I will definitely return next year and arrive right at the beginning to avoid the lines. Maybe Milwaukee could do something similar on or near the lakefront.

All photos by Maegan Eli