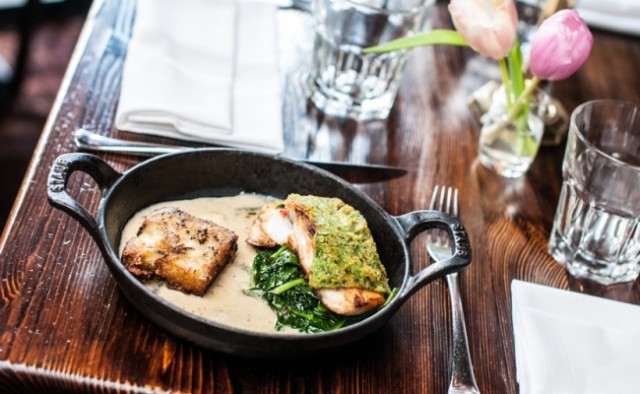 I’m a Southerner and lover of food. Growing up in the South, I discovered the region possesses distinct and diverse culinary identities. Cities like Charleston, New Orleans and Nashville incorporate various influences into their cuisines.

But what about Milwaukee, the city I have spent the past nine years living in?  What is Milwaukee’s culinary history? Does Milwaukee even have a culinary identity?  In a new book, “Milwaukee Food: A History of Cream City Cuisine,” food writer Lori Fredrich aims to answer some of these questions.

Fredrich explains that the book aspires to give people a brief history of how Milwaukee grew into the dining the scene we have now. Then she explores the restaurants and people who are shaping what Milwaukee food looks like today. Milwaukee is more than just beer, brats and cheese.

I chatted with Lori about her new book, Milwaukee’s culinary identity, Milwaukee ethnic cuisine, and other food-related topics. You can listen to the conversation in the player above.

“Milwaukee Food: A History of Cream City” will be released Sept. 21 at your local bookstore and on Amazon. You can pre-order the book via Lori Fredrich’s website.

The biggest surprise Lori discovered while working on the book:

“I think the biggest surprise to me is that we talk about Milwaukee coming into its own recently and the dining scene is just blowing up now. After doing research, there were a lot of people talking about Milwaukee food in the 1970s. There was a food critic by the name of De Groot. He came to Milwaukee probably three or four times in the 1970s. At one point he said, ‘You know Milwaukee is on par with some of the big food cities like San Francisco.’ The one thing he said in the 70s, ‘The only thing you don’t have is a fine dining French restaurant,’ which we didn’t. And then by 1975, we got our fine dining French restaurant.”

On a dish that could be uniquely Milwaukee:

“There are dishes like goat cheese curds with tomato sauce at La Merenda that are produced very locally. I know that Jonathan Manyo at Morel is using a lot of local products. He has gone so far as to say that they don’t serve seafood, they serve lake food. He has really gone above and beyond to find local fish that he can put on the menu.”

Lori also talked about a local forager, “Mushroom Mike.” Among other things, he gathers cattail pollen, a flour substitute that Chef Manyo uses in his restaurant.

One part that didn’t make into the interview was a discussion on Native American influence in Milwaukee cuisine.  We discussed what Chef Van Luu at Potwatomai’s Localvore is doing with Native American ingredients and cuisine like incorporating the fruit PawPaw into dishes.

Lori will be planning a series of events to support the book called the Cream City Tour, where she will be visiting the restaurants that are featured in the book. Lori also said this will not be her last book, she has plans on writing books on Milwaukee’s ethnic food scene and the cocktail scene.