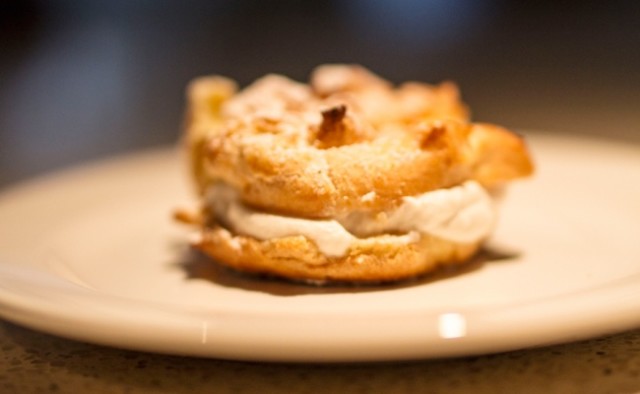 Wisconsin State Fair kicks off today and that means its culinary symbol, the Cream Puff, has taken over the city. In honor of this rich tradition, I decided to make my own version of the tasty treat — with a little Southern charm.

To be honest, the cream puffs at the State Fair don’t have enough flavor for me. So, I adapted the recipe from the blog The Foodie Patootie. I added some good old Kentucky bourbon, along with some vanilla, to give the cream a more refined flavor. Please use good bourbon — not the cheap stuff in a plastic bottle.

The original recipe says it would take about 40 minutes to make the cream puffs. Since it was my first time making them, it took 40 minutes plus an additional hour! I had to remake the cream because I over-whipped the first batch and I think it became butter (a bourbon-flavored butter). I wish I would have seen this tip from Martha Stewart on how to fix over-whipped cream.

To be honest, you can exchange the bourbon for your favorite adult elixir like rum or brandy. But I think bourbon works best.

The dough is your basic Pate a Choux (https://en.wikipedia.org/wiki/Choux_pastry), which is universal. You can make it into a variety of other dishes, such as funnel cakes, beignets and eclairs. The dough has been around since the 1500’s.

1. Preheat oven to 400 degrees.  In a saucepan, combine water and butter and bring to a boil. When it begins to boil, add the flour (slowly), salt, vanilla and sugar. Stir the mixture constantly until a dough forms.

2. Once the dough is formed, place it in bowl. Then add the eggs one at a time, mixing each into the dough. When all the eggs are in the dough, using a electric mixer on medium for about 3 minutes.

3. Prep a cookie sheet with parchment paper.  Then drop about 1/4 cup of the dough on the sheet. You should have enough dough to make 9-10 puffs.

4. Place the cookie sheet in the preheated oven and baked for 25-35 minutes until golden brown. Turn off the oven and cut a slit in the side of each puff to allow steam out. Leave the puffs in the oven for about 60 minutes to dry. Remove puffs from the oven and place on a cooling rack. Split all the puffs in half and now prepare the filling.

5. Before making the creme filling, place the a metal bowl and your mixer’s attachment in the freezer for 15-25 minutes.  Take the bowl and attachments out.

6. Pour the cream in the bowl and mix on high for about 1-2 minutes. Add the sugar, vanilla, and bourbon to the cream. Continue mixing for another 3-4 minutes until you have peaks.

7. Take the cream and place it in a piping bag or plastic bag and cut a corner out.  Fill the puffs with the filling to your liking.  Dust the cream puffs with powdered sugar and serve.