The return of bread in Milwaukee

The return of bread in Milwaukee 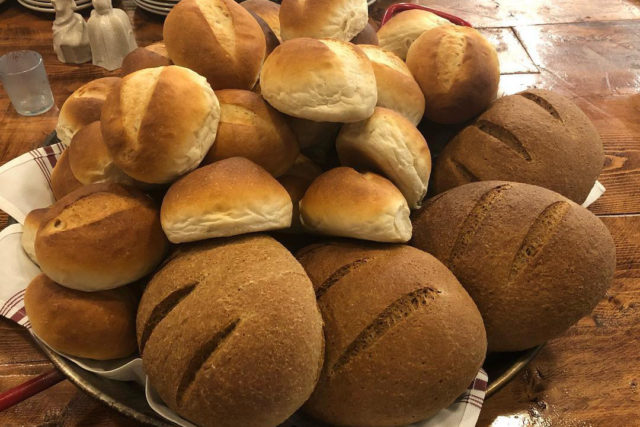 Slowly but surely, bread in Milwaukee is making a return. We’re talking about bread on tables and menus in restaurants—warm, fresh, rustic loaves of handmade sour doughs and fresh butters. Even the classic breadbasket seem to be making a comeback. But, these aren’t your average loaves.

Did bread really go anywhere? It kind of did. Following gluten-free and carb-fearing fads and an attitude of not wanting to “fill up” before a good meal, we started seeing breads before a meal become a thing of the past. But (thankfully), there’s a new trend of chefs and bakers taking a more artisanal and local approach to put bread back on the table. This time, with purpose.

Ardent, Birch + Butcher, Amilinda and Honeypie are just some of the recent examples of restaurants adopting a bread program, just like restaurants adopt a wine program. So, these are breads baked in-house and ingredients that are sourced and milled locally in Wisconsin.

At Birch + Butcher, which opened this year, their thing is open hearth cooking. In the mornings, they use it to hand make and bake bagels. In the evening, they offer a bread course of breads-of-the-day made from scratch and hearth-baked. One of their specialties is a sweet cornbread and whipped butter.

We’re calling it: look out for the rise of the bread trend.

Ramen enthusiasts: check out “Ramen Heads.” It’s a new documentary that is being called “a perfectly slurpable film.” Legendary Chef and “Ramen King” Osamu Tomita opens his kitchen along with five other prestige ramen shops to share recipes and trade secrets. It’s a beautiful, simple and stylized homage to Japanese-style noodle and broth and the philosophy and culture that comes with it.

Plus, some big Milwaukee restaurant events

On this week’s show, we talk about bread—enough said. And, calling all ramen lovers: there’s a new documentary about the art of noodle and broth. We also talk about some big restaurant event news: the Travisty pop-up, Milwaukee Chop House’s new menu, the Dim Sum Give Some fundraiser, Battle of the Beef and cooking with Yollande Deacon of Irie Zulu.

The film is making its Chicago premiere on April 20. There aren’t any Milwaukee screenings scheduled yet, but we’ll certainly be looking out for one.

Chef Travis Cook has a pop-up restaurant coming to Birch + Butcher for a series April 8 and 29 featuring six courses focused on the open fire. The small plates will include a reuben tartare of sauerkraut, rye and pickle, brassicas of cauliflower, chicken and egg, pasta with new potato, allium and duck, beef with sorghum, beet, balsamic and a dessert made with Captain Crunch. And, each of these will be paired with a beer.

Milwaukee Chop House has a new chef and a new menu. The restaurant inside the Hilton has always been known for their prime cuts of meat, but new menu is also bringing the surf to match the turf. One of the new seafood items is a Mero Sea Bass, which is a Patagonian toothfish served with a lemon beurre blanc and a celeriac-apple slaw. And, they have scallops with creamy farro, beech mushroom, pancetta and pea tendrils. The list goes on. You can see the full menu here.

Dim Sum Give Some

Dim Sum Give Some is Sunday, March 25. This cocktail party style fundraiser brings together some of the best and brightest in the industry (from over 30 Milwaukee restaurants) as they support Dan Jacobs of DanDan who is battling Kennedy’s Disease. All proceeds after costs benefit The Kennedy’s Disease Association.

Battle of the Beef

On April 4, New York and Montreal go head-to-head at Third Coast Provision’s Oak & Oyster to decide who reigns supreme in the fight for smoked meat supremacy. A $25 ticket will get you smoked meat sandwiches from a carving station featuring both cities’ finest spiced beef, deli sides and themed cocktails.

Master the basics of African and Jamaican cuisine

Learn to cook like Yollande Deacon on March 31 at her restaurant, Irie Zulu. Explore the mesmerizing ingredients, flavors and textures of African and Jamaican cuisines. Learn about spices, ingredients, cooking techniques, culture and people’s stories. And, master the art of making healthy, delicious and easy family recipes. Enjoy three plates and a glass of wine. Later, you can recreate Yollande’s recipes for your own family using her recipe cards.