Eating your way through Madison in one day

Eating your way through Madison in one day 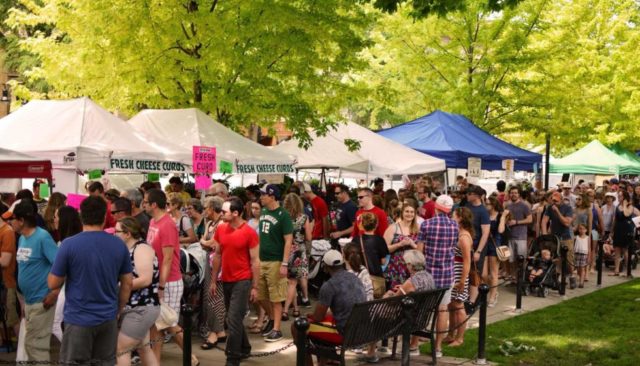 On this week’s edition, we’re discussing Ann’s day trip to Madison to explore its culinary scene as part of the latest issue of Milwaukee Magazine. We also discuss a pork-centric dinner at The Yard, the food at the Urban Island Beach Party, and Merriment Social’s fourth anniversary celebration. Stream the episode below.

Madison’s culinary scene is really good, and it’s growing. Plus, because of where Madison is in the state and its proximity to farmers and cheese makers, its restaurants get some great local products that can be difficult to find in Milwaukee.

Ann recommends going early, as early as 7 or 8 a.m., to hit up the Dane County Farmers Market for a light breakfast. It’s filled with produce vendors. From there she recommends the cheesemongers at Fromagination, ice cream at the Babcock Hall Dairy Store, lunch at Graze, salami at Underground Butcher, happy hour at A Pig in a Fur Coat and finally dinner at Forequarter, the restaurant next to Underground Butcher. They have a killer charcuterie board. If that day doesn’t fill you up, nothing will.

If you see a bunch of people headed down to the beach in Hawaiian shirts tonight, it’s probably because of the Urban Island Beach Party, which runs tonight from 5-11 p.m. A ton of breweries and craft distillers will be on hand, so come thirsty. Happy Dough Lucky will be serving mini donuts. Iron Grate BBQ and Pete’s Pops will also be there, along with many of the city’s best food trucks.

Then we discuss Pig & Pinot, a rustic communal dinner in The Yard, which features three pork-centric courses, including a roasted pork shank, all paired with pinot wines. And finally we close the episode by discussing the Mexican Street Party, Merriment Social’s way of celebrating its fourth anniversary.