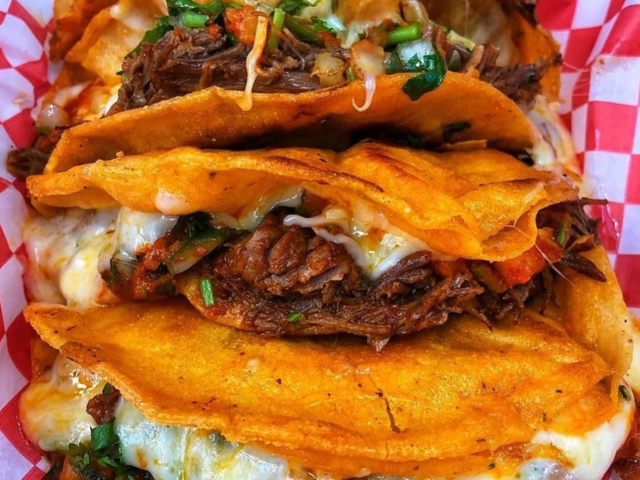 Birria tacos are very trendy right now, but they live up to the hype. Birria is a stew that can be made with goat meat, but it often made with beef, lamb or even chicken. One place has a vegan version with jackfruit. The meat is marinated in a chili-laced broth, and it’s served with a consommé that you can dip the taco in.

One prominent spot serving them is Chucho’s Red Tacos, a food truck on South Sixth Street. You can also find them at Lazo’s Taco Shack (641 N. James Lovell St.), which serves them as their Wednesday special (four for $14.50). Ann shares a few other spots that offer them, too.

Credit Los Angeles for the trend: A spot started serving them there, and people started Instagramming pictures of those tacos (which look beautiful). Those photos went viral, creating incredible demand for birria. It took a few years for the trend to make its way to Milwaukee, but now it is here with a vengeance.

One of my favorite spots for birria is El Tlaxcalteca, 1300 W. Burnham St., which serves a giant, three-foot-long grilled birria dish called the machete.

Today and tomorrow, Uncle Wolfie’s is offering a pizza pop-up. There’s a vegan pizza with roasted garlic, fermented peppers and arugula and a pork belly pizza with broccoli rabe, among others. It remains to be seen whether they’ll continue doing these pop-ups in the future, but if this weekend’s is successful it could happen.

Hear us talk about all that and much more on this week’s episode.