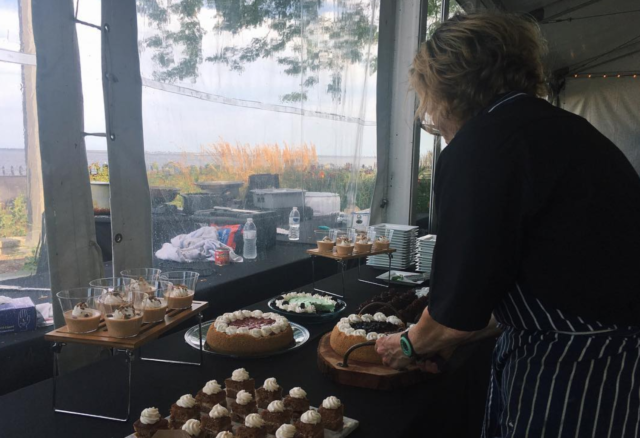 Julie Thorsen is the one of the most renowned, but underground pasty chefs in Milwaukee. That’s because she caters specifically to artists backstage at the Pasbt, Riverside Theater, Tuner Hall and occasionally at Summerfest. So unless you’ve performed there, you probably wouldn’t be able to try any of the treats she makes.

She has a really interesting story that Ann brought us in March’s issue of Milwaukee Magazine. Thorsen originally had a career as a mechanical engineer with We Energies, until she got laid off in the early 2000s when the company was downsizing. After that, she decided to completely change her career path and attend Le Cordon Bleu in London to study pasty arts.

There, she started giving her pastries away to actors at West End theater as a way to see shows. And after she received her certificate, she knew what she wanted to return to Milwaukee to do: bake for celebrities. 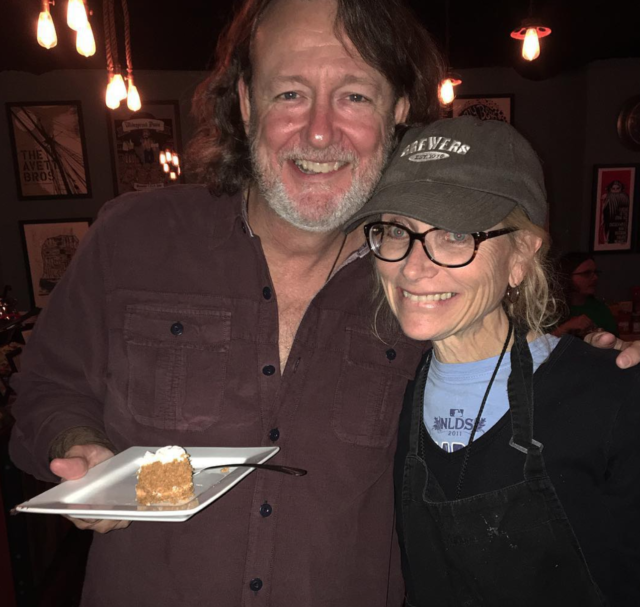 Thorsen and John Bell of Widespread Panic via Thorsen’s Instagram

Now, that’s exactly what she’s been doing for 10 years for the Pabst Theater Group. She’s baked chocolate mousse for Journey, pumpkin cheesecake for Thom Yorke, lemon bars for The National, personalized sugar cookies for Trevor Noah and a dessert spread for Mel Brooks so good he said he might love her.

Follow Thorsen on Instagram to keep up with her latest treats for the talent that comes through Milwaukee. And pick up this month’s Milwaukee Mag to read the whole behind-the-scenes feature that Ann wrote about her.

The last empty space in the Crossroads Collective food hall will be filled by a place called Raw Bar, a new seafood spot from the chef and owner of Morel in Walker’s Point. It will have seasonal seafood such as raw oysters, king crab legs, crab claws, shrimp cocktail and ceviche. But in sprite of the restaurant’s name, it won’t serve everything raw. It will also have sandwiches like a lobster roll a fresh tuna melt and soups like a lobster bisque and clam chowder. As for the decor, it will be inspired by the movies “JAWS” and “The Life Aquatic with Steve Zissou.” Raw Bar is slated to open in mid-March.

On Thursday, March 21, Braise is putting together a four-course vegetarian based fermentation dinner with fermented drink pairings like kombucha, beer and wine. The first course is coffee kombucha glazed carrots with coconut kefir, roasted peanuts and baby kale. The second is spent grain cannelloni with braised rutabaga and mushroom, house chevre and oaked apply vinaigrette. Then there’s a shio koji fried celery root or koji rubbed beef ribeye with carrot kimchi and black garlic aioli. The last course is a peach vvass cake with lacto-fermented honey and brewer’s mash granola. Get reservations and more information here.

Char’d is doing a new dinner concept on Sundays, starting on March 10. They’re offering a cultural dining experience centered around a traditional Korean home meal of rice, soup and “banchan.” These are little side dishes of different textures, flavors and colors. The goal of this type of meal is to stimulate the full range of flavor senses from sweet, sour, spicy, bitter and salty tastes and even try to incorporate as many colors in the foods as possible. Get reservations here.

Here are two great events to combine your love of pie and math on March 14 for Pi Day:

Hatched bakery is taking over Pilcrow coffee for the day to sell its signature pies.

Tre Rivali is letting you have your pie and feel good about it too. They will donate 100 percent of all proceeds of their pie sale to Chefs Cycle: No Kid Hungry.

Sunday, March 10 is the last day you can visit Chilango Express at 6821 W. Lincoln Ave. in West Allis. But this is not bad news! It’s good—the Mexican restaurant (one of our favorites) is tripling its size by moving a few blocks away to 7030 W. Lincoln, the old Sofia’s Italian restaurant. Not only will the new place have more tables, it will have a bar and an expanded menu adding items like chimichangas, fajitas and nachos. Soon it might even offer breakfast. The new location opens March 14, 2019.

In honor of International Women’s Day (and also her recent feature in Milwaukee Magazine) we are putting the spotlight on Julie Thorsen, pastry chef at the Pabst Theater Group. Yes, they have their own pastry chef.

Read more and listen to the podcast episode below to hear more about Julie Thorsen, a new raw bar in Crossroads Collective, a new Sunday dinner menu at Char’d, Chilango Express’ new location, a fermentation dinner and Pi Day.