Step into the ‘Milwaukee Kitchen,’ a new YouTube cooking show about community

Step into the ‘Milwaukee Kitchen,’ a new YouTube cooking show about community 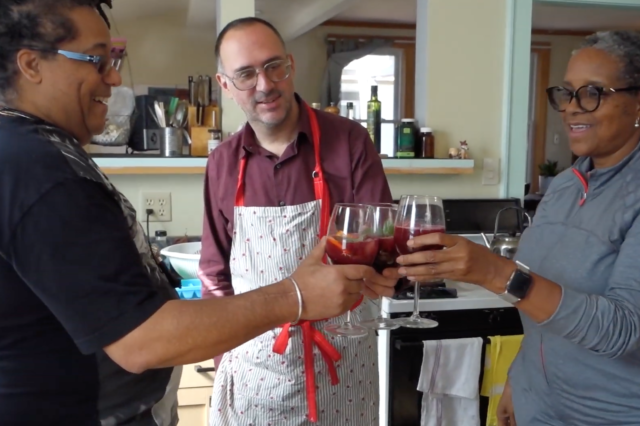 From the Milwaukee Kitchen “I Don’t Mind Sour” episode

Milwaukee Kitchen is a new made-for-Youtube cooking program set in Riverwest, Milwaukee. Homemaker ChefD is busy in the kitchen, yet always has time for neighbors and friends. Those circles are growing now that the word is out. The program has been described as “Mr. Rogers for the 21st century cooking crowd.” Deep-rooted traditions like reverence for Ruth Berolzheimer and the “American Woman’s Cook Book” meet contemporary interest in hybrid flavors, resulting in a singular contribution to the eclectic history of human experiments with food and socializing.

There’s a new cooking show based in Milwaukee that’s being called “Mr. Rogers for the 21st century cooking crowd.”

Read more and listen to the podcast episode below to hear more about the Milwaukee Kitchen Youtubers, some fine Japanese sushi, new Purple Door ice cream flavors and more.

Also, on May 10, 2019 from 6-8 p.m. at Woodland Pattern, the cast, crew and fans will come together to celebrate season one and fundraise for the next.

Omakase is a Japanese phrase that means “I’ll leave it up to you.” It describes a unique experience where your meal is entirely in the hands of a sushi chef. Chicago has four dedicated omakase restaurants, but it didn’t have any a year ago. Milwaukee doesn’t have any yet, but maybe it will follow Chicago’s lead soon. In the meantime, we want to talk about those four spots because we think they’d be worth a short drive/train ride down south. See the restaurants here.

Speaking of sushi, Wauwatosa is getting a new seasonal sushi and Thai food restaurant from the owners of Rice n Roll. The new spot, Kin, might be open as soon as mid-April.

On Sunday, Purple Door is celebrating both Milwaukee Day and its eighth anniversary with a new ice cream flavor. It’s called “Purple Moon,” an original take on the blue moon.

Try the flavor yourself with a free mini cone on Sunday, April 14 at Purple Door’s location on 2nd St. or at the Sherman Phoenix.

And in honor of April 19’s full moon, the Walker’s Point shop will be giving away more free Purple Moon mini cones all day.

Also for 414 Day, Great Lakes Distillery is having a release party for its Good Land Coffee Liqueur made with Valentine coffee. And if you come dressed as Wayne or Garth from “Wayne’s World,” you can get on a distillery tour for free.

The annual beer, cheese and sausage fest is almost here! Saturday, April 13 at the Exposition Center at Wisconsin State Fair is your chance to sample all the beer and sausage your heart desires. Get more info. here.

Also on Saturday is a beer cocktail workshop at Bittercube Bar & Bazaar which will explore the world of cocktails using beer as a main ingredient. The event is also part of the launch of a beer Vennture Brewing created based Bittercube’s our cocktail called The Kid. Get more details about the event here.