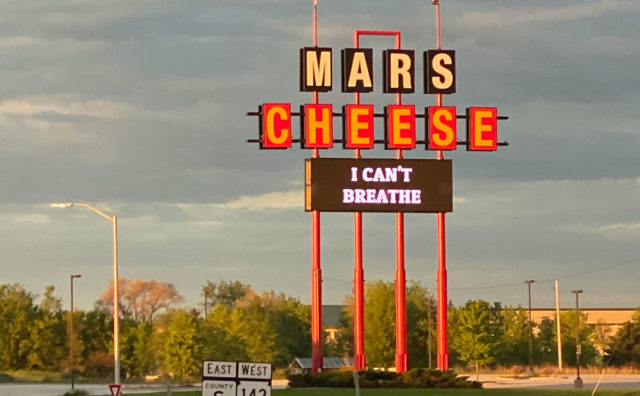 This week we didn’t talk about a new restaurant or an upcoming pop-up. We didn’t even talk about what we were cooking this past week. Why? I’m tired, and I’m angry. Being a Black man and watching George Floyd, who happens to be the same age as me, killed on national TV made me nauseous. His death came only a few days after watching the video of Ahmaud Arbery, where I also almost threw up. And you might ask yourself, what does this have to do with food, restaurants?

This week on This Bites, not only do we talk about how some Milwaukee restaurants are taking a stand against police violence and systemic racism, but we also have a conversation about food and its role in these issues.

Restaurants have been hit hard by the effects of COVID-19, and many are struggling to stay afloat. But that hasn’t stopped some in the community to take a stand against police violence and systemic racism.

The iconic Mars Cheese Castle used its highly visible sign to convey the feelings of a lot of us with three words: “I Can’t Breathe.” In an interview with WUWM, Mars Cheese Castle co-owner Michael Ventura explained why he and his cousin put up the sign.

“My grandparents taught those values to us that you respect your fellow human being, you treat them with dignity and respect, and that’s what that sign means to me,” Ventura said.

In the city of Milwaukee, other restaurants demonstrated their solidarity in various ways. Braise is collecting donations that will be distributed to Milwaukee organizations helping promote racial equity. Earlier this week, Goodkind not only closed its doors in support of the protesters, but it also handed out water and supplies. Birch + Butcher also closed so their employees could march.

Throughout June, DanDan will be donating 10 percent of all sales to a different charity each week. This week it will donate the proceeds to NAACP. The Plate Collective did something similar with its monthly ramen, where they donated 10 percent of sales also to the NAACP.

Our conversation after goes further into the intersection of food and race. We talk about the gentrification of Nashville Hot Chicken and soul food, how foods like watermelon have been used to dehumanize the Black community. We even talk about how Bon Appetit has made a commitment to cover the more social issues in their magazine and website.

We also discuss why it is important to support Black-owned restaurants, breweries and distilleries.

If you want to learn more on this subject, I highly recommend you check out Michael Twitty’s book “The Cooking Gene.” The book is personal memoir about food and race, tracing the author’s roots. Also check out Twitty’s blog, Afroculinaria, where he writes about these issues. I suggest you read his latest piece titled “A Scolding in Seven Pieces.”

And then subscribe to the Gravy podcast. One of my favorite food podcasts that looks a food beyond the plate. They recently received a James Beard Award for their episode titled “Mahalia Jackson’s Glor-fried Chicken.” The podcast tells the story on how Gospel star Mahalia Jackson used fried chicken to push for economic empowerment in the black community.