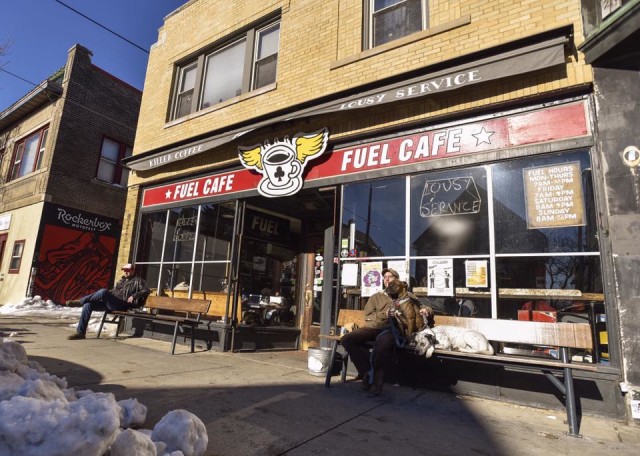 plus fat-washing bourbon, and Is Bronzeville the next hot neighborhood for new restaurants?

Tune in Friday mornings at 8am for “This Bites,” a conversation on Milwaukee culinary and restaurant culture with Milwaukee Magazine’s Dining Critic Ann Christenson and me.

On this week’s episode, Ann and I talk about the new Fuel Cafe coming to Walker’s Point, upcoming food events like WMSE’s Rockabilly Chili Fundraiser and Bourbon & Bacon at Rumpus Room, and how to make a bacon Old Fashioned using a technique known as fat-washing.

We also share their predictions for the next hot neighborhood for new restaurants.

Support for This Bites comes from hankr. The new, visual food-finding app uses photos of dishes available at Milwaukee restaurants to help hungry people figure out what they’re in the mood to eat. The hankr app is available for Apple or Android devices.

Earlier this week, the owners behind Fuel Cafe in Riverwest announced that they will be opening another Fuel Cafe location in Walker’s Point. In the past few years, Walker’s Point, Bay View have been hot spots for new restaurants. This made us wonder what would be next hot neighborhood.  I shared my belief that it will be Bronzeville.  It’s close to where the new arena will be built and the existing buildings look pretty good.  It is also quick access to the interstate.

Taking place on Sunday, March 6th, 11 a.m. to 4 p.m., Rockabilly Chili Fundraiser is a chili competition that pits over 50 Milwaukee restaurants, cafes, and caterers against one another to determine the city’s best chili as voted on by event attendees. Once again, there will be chili pepper races in the mold of Miller Park sausage races, Artist Working in Education’s children’s area, and music. Awards are given to winners in five different categories: best meat, best vegetarian, most unique chili, best heat, and best vendor display/presentation.

Lift your spirits during five exclusive nights of sampling and sipping. Satisfy your palate, and pocketbook, with specially priced small plates, appetizers and mixers at 30 downtown hot spots. So round up your friends and belly up to the bar. Cheers!

Steaktacular at Joey Gerard’s (all of March)

Enjoy a wide variety of specialty meats and steak options, special appetizers and dessert, beer and wine pairings and more!

Bacon and Bourbon at Rumpus Room on March 24

Join The Rumpus Room for the first installment of Bourbon & Bacon – an intimate, small plates dinner featuring bacon alongside Jefferson’s Bourbon and Whiskeys on Thursday, March 24.

Jefferson’s is a small batch bourbon producer in Kentucky, known for creating unique bourbons through blending and experimental aging techniques – including “Ocean” a bourbon aged at sea!

Speaking of Bacon & Bourbon, we talked about fat-washing bourbon and making a bacon Old Fashioned.  Here is a recipe for a Bacon Old Fashioned via New York Magazine. I suggest you use Nueske’s bacon.

Bourbon-Bacon Infusion:
3 or 4 slices bacon, or enough to render 1 ounce of fat (PDT uses Benton’s, but any extra-smoky variety will do)
1 750-ml. bottle of bourbon such as Four Roses Yellow Label

Bourbon-Bacon Infusion:
Cook bacon in pan and reserve rendered fat. (1) When bacon fat has cooled a bit, pour off one ounce from pan. (2) Pour bourbon into a non-porous container. (3) Strain the bacon fat into the container and infuse for 4 to 6 hours at room temperature. Place mixture in freezer until all the fat is solidified. With a slotted spoon, remove fat and strain mixture back into bottle.