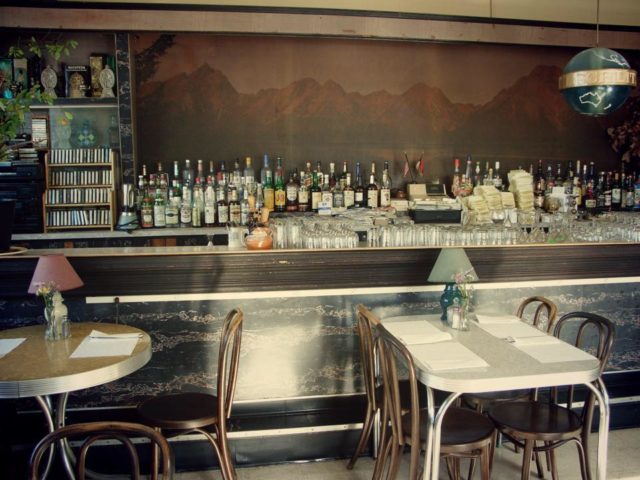 In her Ask Ann column in Milwaukee Magazine, Ann recently gave her recommendations for places for romantic dining in Milwaukee for Valentine’s Day or any other special date night. Here’s what she said:

“First place that comes to mind is Three Brothers, because it’s cozy, feels like an escape (tucked away on a quiet Bay View street) and the hearty, stewy Serbian food is perfect for sharing. And the place just seems slower. But bring cash!”

“Meraki in Walker’s Point is a restaurant I don’t mention enough. The menu targets grazers to prix fixe diners, and the seating options include intimate booths. (Plus they have a secret-menu burger!)”

“Mistral, the Mediterranean bistro attached to the Bay View’s Avalon Theater, has a private alcove table you can request by reservation. And with the cinema right there, you can hit an early or late screening – under the enchanting stars projected on the theater ceiling.”

“Granted, a winter evening won’t offer much of a lake view at Harbor House, but who needs a view when you’re gazing into somebody’s eyes? Request a booth or table next to the windows. The menu offers special-occasion must-gets like whole steamed lobster, crab legs, surf and turf and raw oysters, which may or may not have aphrodisiac properties.”

Here are some other ideas for the hopeless romantics out there:

At the Tapas & Amore event, minglin’ singles and lovers alike will be spicing things up in the midst of the winter chill thanks to the flamenco guitar sounds of Evan Christian and a Spanish-themed cocktail and tapas menu available in the Iron Horse’s Smyth restaurant, Branded bar and The Lobby lounge. It’s the perfect place to whisper “te amo” to the one you adore, or celebrate the season with your squad (and plenty of vino).

Bavette La Boucherie might be a great foodie date on February 14. It will have a special four-course tasting menu available in addition to the regular menu. The sweetheart specials include lots of oysters, scallops, roast quail and more.

Safe House is hosting an anti-Valentine’s Day party called Operation: Bang and Burn. They’re asking that you “bring an item that reminds you of your ex to destroy in a fiery inferno.”

This Valentine’s Day, Strange Town will be cooking and serving a track-by-track rendition of the Smiths classic “Strangeways, Here We Come” LP! Get more info about the prix fixe menu and reservations here.

Seemingly combining the trends of food halls and food trucks, Milwaukee will be getting it’s own “food truck park” this spring. The owner of Mazorca is behind the new concept and has bought a lot and building in Walker’s Point to open Zocalo Food Park and Tavern.

Jesus Gonzalez says the hope for Zocalo, which is the word for a public square in Mexico, is to create a similar gathering place by bringing in food trucks, a beverage program and even have room for parking, outdoor seating, live entertainment and games such as bocce ball and soccer.

Pho-bruary in the Silver City

It’s Pho-bruary! This month, Thai Bar-B-Que, Bamboo and Vientiane Noodle Shop will be selling pho for $5 a bowl when you dine in. Usually it costs between $8 and $10. Though just because it’s on sale, doesn’t mean you shouldn’t tip your server.

Dim Sum + Give Some

Dim Sum + Give Some is back this year as a gala. Monday, March 18 from 6:30 to 10 p.m. at the Italian Community Center, 15 acclaimed chefs from Milwaukee, from across the Midwest and as far as Colorado will be coming together to put on a six-course dinner to support The Kennedy’s Disease Association in honor Dan Jacobs of DanDan, who is battling Kennedy’s Disease. This cocktail party-style gala is sure to bring together good food and good drinks over a good cause.

Valentine's Day might be overrated, but these Milwaukee restaurants aren't

On Valentine’s Day—or any other date night—you want great food and ambiance that doesn’t include blasting music, loud neighboring tables or hovering servers. Here are our recommendations for some cozy places to set the mood.

Read more and listen to the podcast below to hear more about spots for romantic dining in Milwaukee, a new food truck park, Phobruary in Silver City, the Dim Sum Give Some event and some other Valentine’s ideas.