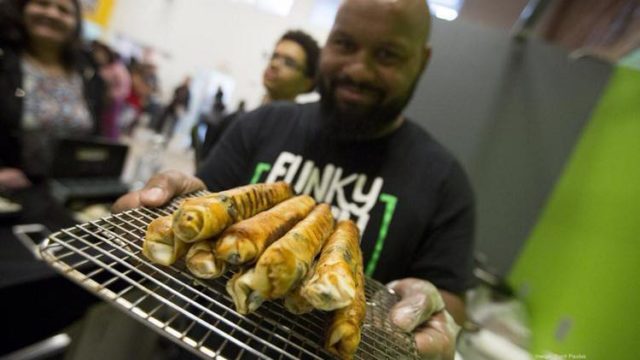 Preview of food at the Sherman Phoenix

The grand opening of the Sherman Phoenix is coming up on November 30. Here’s a preview of all the food options we’ll see there:

In other news from Funky Fresh, TrueMan McGee is also hosting an all-you-can-eat spring rolls festival on Saturday, November 10 from 7-10 p.m. to celebrate the restaurant’s three year anniversary and the opening of its second location.

Celesta Restaurant is a globally minded vegan restaurant that serves otherworldly food, always house-made, soulful and with bold flavors. It moved into the old Abu’s Jerusalem of the Gold space on Farwell on the East Side. Now, the owner, Melanie Manuel, is starting a new Dinner Party series, starting with an homage to Abu’s, whose Middle Eastern specialties included falafel, (meat-based) shawarma and tabbouleh. Abu’s, which was around from the late 1970s to late 2010, also served a rosewater lemonade that grew so popular that Celesta’s Manuel got the recipe and serves it now at her restaurant.

The homage dinner on Sunday Nov. 25 at 5:30 p.m, served family-style, includes hummus and pita, tabbouleh, spinach pie, Mujaddara (rice-lentil pilaf), Lebanese okra, falafel and (for dessert) asafiri, which is a wonderful filled pancake. Plus Arabic coffee or tea to finish the meal.

It’s a small restaurant though, so tickets are limited. You can make your reservation here.

Food truck and restaurant Falafel Guys, known for its falafel, chicken shawarma sandwiches and more are joining the lineup of vendors of the Crossroads Collective food hall, due to open in November on the East Side.

The other restaurants lined up for the food hall include Laughing Taco, Scratch Ice Cream and Frida, a soup-and-sandwich restaurant named for Mexican artist Frida Kahlo, from the owners and chef of Tess., Chef Martin Magana, who is from the Mexico City area, is fan of the painter’s.

Tacos and tortilla making with Jesus Gonzales of Mazorca

On Sunday, November 18 from 1:30-3:30 p.m., Strange Town is hosting a rare cooking lesson with Jesus from the Mazorca taco truck. The casual, fun class will be dealing with plant-based, vegan angles on everyone’s favorite – the taco! Beginners to pros invited. Recipes will be given in physical form at the event. Strange Town is a small space without stations for everyone to cook, so this is more of a demonstration-style class, but still informative.

We’re loving the new cooking show on Netflix “Salt, Fat, Acid, Heat.” It’s a four-episode series based on (and named after) Samin Nosrat’s James Beard Award-winning cookbook and it’s unlike any other food show on TV. Nosrat rejects the traditional “reality” formula and makes a show that is actually real. This is one show you won’t regret binge watching this weekend.

The Sherman Phoenix is rising from the ashes, harnessing the spirit and assets of the neighborhood as a catalyst for unity—and good food.

Listen to the podcast and read more below for more on Celesta, Funky Fresh Spring Rolls, food at the Sherman Phoenix, Mazorca Fest, Crossroads Collective, an interesting recipe In Milwaukee Mag and the new show “Salt, Fat, Acid, Heat.”