The squeaky history of cheese curds

The squeaky history of cheese curds 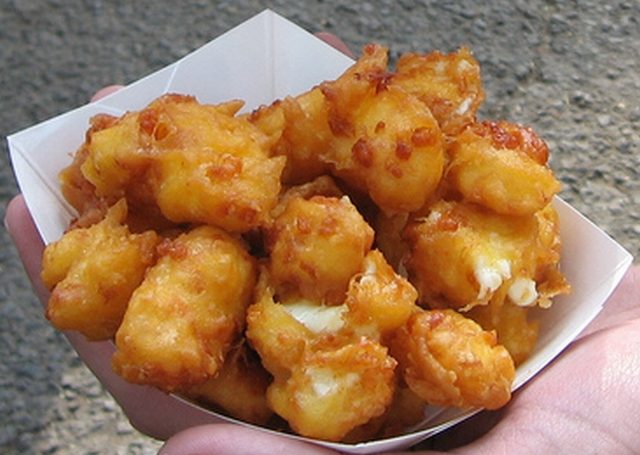 On this week’s episode, we talk about the history of cheese curds and the best places to find them in Milwaukee. We also talk about Alice’s Garden, The Vanguard’s upcoming seafood pop-up restaurant, and Iron Grate’s South American inspired BBQ event.

First, Ann & I discussed her story, “Little Squeaks,” which is about the evolution of the cheese curd and the best places to find cheese curd dishes. We also talked about the origin of fried cheese curds and no they didn’t originate here in Wisconsin.  Matter of fact, fried cheese curds origins begins in Ancient Rome with a dish called Globuli. The Romans created a dish called Globuli, which is basically fried curds of cheese. The recipe consisted of dredging the curds in semolina flour, frying them in olive oil, then rolling them in honey. Here is a recipe via Antiquity Now.

Next, we talked about a feature story on Milwaukee’s Alice Garden from New Food Economy. The article looked at the history and present of one of Milwaukee’s most important garden. Here is an excerpt:

But this two-acre tract, hemmed in by chain-link fencing, is about more than urban agriculture. It connects two essential movements in Milwaukee’s African American neighborhoods: Black Lives Matter, and a garden movement focused on healing a community traumatized by the racism, abandonment, and day-to-day realities of living in the country’s most segregated metropolitan region.

The Vanguard to dress up as a seafood restaurant for Halloween

Last year, the Bay View sausage joint decided to join in the Halloween fun by dressing up as a Chinese restaurant called Golden Dragon. This year, Vanguard will take on the persona of a seafood restaurant called Hook, Line and Sinker on Oct.29.

On Oct. 23, Iron Grate BBQ Co. will be here presenting an incredible style of live fire BBQ to Ray’s. A menu featuring the likes of Argentina and Asado cooking will bring a unique experience like no other, with spit-roasted lamb and beef short ribs. These sweet meat treats will be prepared in a 500-gallon, hand-built wood-fired smoker, that Chef Aaron Patin made himself, named Edna. In addition to Aaron’s gastronomic delights, the wine will be flowing like the salmon of Capistrano, as we are featuring twelve different red and white gems for you and yours to accompany this BBQ extravaganza.

Here is the entree portion: