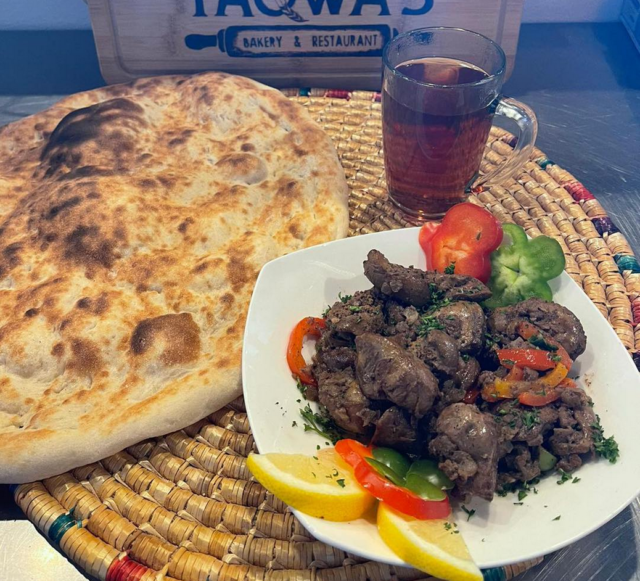 On this week’s episode, we’re talking about a new Mina pop-up, a conflict between home bakers and the Wisconsin Bakers Association, and a new cocktail project I’m working on.

But first, we kick things off by talking about Ann’s coverage of a great Middle Eastern restaurant. Taqwa’s Bakery and Restaurant, 4651 S. 27th St. in Greenfield, specializes in a bread called manakish, and serves a full menu for breakfast, lunch and dinner, with items like kebabs. Ann highly recommends the mosakhan – “a crispy-skin grilled half-chicken draped over bronze-colored caramelized onions on taboun” — and also the wide variety of deserts. Everything sounds delicious.

This was an interesting news story: Wisconsin home bakers have sewed the state over restrictions on sales. A teenager started a business selling homemade macaron cookies, which she assumed was allowed under state law. But she received a letter from the Wisconsin Bakers Association telling her she was in violation of the law. It feels to me like sometimes Wisconsin doesn’t understand the plight of small business owners. We both believe bakers should be able to sell their home-baked goods.

In happier news, there’s a pop-up we are excited about. Mina, which is operating out of the Crossroads Collection, is hosting a pop-up at the new Dubbel Dutch boutique hotel, 817 N. Marshall St. It’ll run over two long weekends in March, and will feature a selection of Mina’s tasty small plates. This is an exciting development for Dubbel Dutch, which has a commercial kitchen that currently isn’t being used.

Because of the extremely limited seating, reservations are recommended.

And we close out this episode with some news about a project I’m involved with. Black Bourbon Society has presented #TheBlackManhattanProject, “a month-long hashtag campaign raising awareness around the need for diversity and inclusion within the spirits industry.” Historically bourbon makers haven’t marketed to Black people, but this effort seeks to change that.

I’m collaborating with Katie Rose of Goodkind on a unique Manhattan cocktail. We’ll have more details about that soon, but I tease the idea on this week’s episode, which you can stream below.