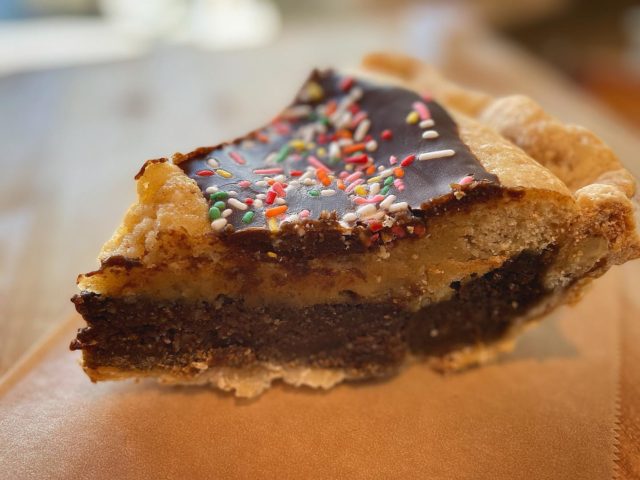 This week on This Bites, we’ve got some news about Colectivo Coffee on Prospect Avenue, an update from the Sherman Phoenix and a great hot dog recommendation.

Also, on Milwaukee Magazine’s website, Ann has a review of a new bakery called The Bake Sale. The location, which was opened by the owner of the West Allis Cheese & Sausage Shoppe Cafe, sells different pastries and treats from bakeries all over the city, including businesses like The Cake Lady in St. Francis, Canfora Bakery in Bay View, and even Simma’s Bakery.

Ann recommends the pies, which come in flavors including cherry, key lime, French silk and banana cream. There are also vegan pies, savory quiches and pasties.

Also in this month’s issue of Milwaukee Magazine, Ann shares her October dish of the month: the char dog at Louie’s Char, 2336 N. Farwell Ave. She describes the dog as having a juicy, snappy texture, thanks to the natural casing. “It’s a really good hot dog,” she says. It’s served on a large brioche bun instead of the customary steamed sesame bun.

Colectivo Coffee is back at Prospect Avenue. The location closed last winter, but now it has reopened with indoor and outdoor seating, albeit with reduced hours (it closes are 2 p.m. everyday). That’s great news for people on the East Side. And, of course, they’ve got a new seasonal menu that features plenty of things with pumpkin spice.

Sherman Phoenix is losing a business. The pizza place Sauce & Spice will be closing after two years, but you still have a chance to get their pizza. They’ll be open until Oct. 23.

And speaking of pizza, Brute Pizza is opening for counter service pizza pick-up inside the Landmark Building at 316 N. Milwaukee St. starting today. It’ll be in the same spot that Donut Monster is. The pizza is known for a really delicious sourdough crust.